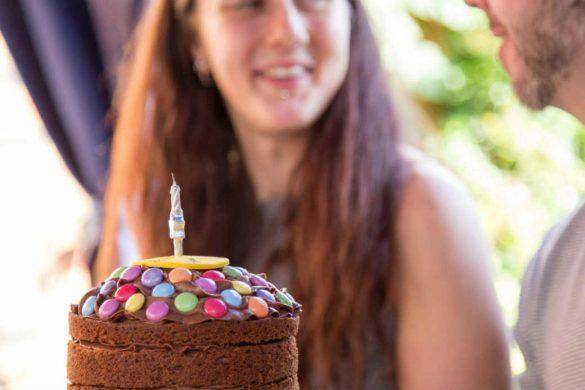 Love the powerful emotion that makes one realise about the real essence of life. It brings us the most desired solace in an eminent way one can only experience if he or she have ever truly felt and gone through the blissful refinement called Love.

Mohan and Sapna were engaged and were soon going to get married and bonded for life. It was an arranged marriage but both of them had found their soulmates in form of each other. Mohan worked in a MNC in an another city. His birthday was approaching in few days. Sapna wanted to be with her beau on his special day and so was Mohan, thinking of being with his beloved on his birthday. As they lived in different cities, it seemed impossible for them to meet on the day. Mohan tried to take leave from his office and go back to his hometown but was denied due to work load of a new venture on board in his company. Sapna felt his anxiousness and decided to give him the much needed surprise on his big day. She took leave for two days from her office and told her parents that she is going for an interview and so she will be going to Bangalore in coming days. She had one of her close friends living in that city. Sapna planned in advance with her friend about her surprise visit to the city.

On the eve of Mohan’s birthday, Sapna told Mohan that she will be busy in long sessions of meetings in her office so not to call her up in the evening. In the meantime, she took the flight and reached Bangalore by late evening. She went to her friend’s house and called Mohan up telling him she was very tired and will be retiring to bed early that night. Initially Mohan felt dejected by her sudden behaviour but didn’t say anything and bid her good night.

Before midnight Sapna, along with her friend, reached Mohan’s office building (he was working night shift in those days). At the stroke of 12, she called him up wishing him happy birthday and asked him to come downstairs to meet her as she was standing outside his office building. He was surprised but said not to make a fool of him by joking like this. But when Sapna kept on insisting on Mohan to come out, he went downstairs to check . And there Sapna was, standing with a big bouquet of red roses and a gift pack in her hands with her ever charming smile. Mohan froze with excitement and couldn’t believe his eyes seeing his beloved infront of him. He hugged her with disbelief saying he could not believe that she was standing in flesh and blood infront of him on his birthday.

This special surprise by his beau made Mohan super happy and ecstatic. Sapna sang birthday song as he cut the cake which Sapna had brought along. Mohan thanked Sapna and her friend for taking so much of trouble for him and coming all the way to meet. Her presence made his birthday all the more special for him in a beauteous way. After that, he left office early and they both went out for a late dinner to celebrate his birthday in a very memorable way.

This was a small gesture by Sapna for making her fiance happy on his special day but had a great impact on their relationship. It got even better, stronger and their love for each other unfolded and multiplied on better note.

Sometimes, some specific surprises fill up our lives in such a beautiful way that they warm up our heart profoundly, making one believe firmly in true relationships. And we can definitely say yes, right kind of relationship indeed bring much desired happiness and contentment to our lives.

Madhu Jaiswal is a poet, writer and social worker hailing from Kolkata, India. She is an optimistic and compassionate person who believes in humanity and sharing smiles. Penning down one's thoughts is therapeutic to the creative souls, and she abides by this. Writings let her explore their inner abilities and express herself to the outer world with ease. She is attached as an editor with The Impish Lass Publishing House Mumbai. Her creative contributions have published in various national and international anthologies, and she often gets featured in many prestigious e-zines. According to her, hope, belief and perseverance are the powerful mantras that can pave our path towards success, no matter what. Her write-ups often revolve around these keywords.