I had always thought instant love was as impossible as instant nirvana. This notion was shattered when I joined Rourkela Steel Plant and was asked to report to the discussion room of the Training Chief. When I entered the room I saw a girl sitting on a sofa.

“Are you also a management trainee?” she asked and smiled. “My name is Madhavi.”

I looked at her and was mesmerised. I had never seen any girl so devastatingly pretty.

At 11.05 on 23rd October, 1986 I fell instantly, insanely in love. If it took me six seconds to decide that Madhavi was my soul mate, it took her exactly six months and six days to make up her mind to be mine. To cut a long story short, after months of pursuit, I won her over. I proposed to her and she accepted.

A day after her ‘confession’ she left for Bhubaneswar to tell her parents.  I too wrote to my father (my mother left us for her heavenly abode earlier).

Three days later I received a telegram from him: “Congratulations to you and Madhavi.”

When Madhavi came back after meeting her parents she looked utterly drained out.

“What happened?” I asked.

“My dad seems to have gone completely berserk. He doesn’t mind me marrying anyone as long as he is from our caste.”

“But Madhu, surely you could have reasoned with him?”

For the next couple of months things continued in the same vein. Then finally one day, she dropped the bombshell.

“Ramen, I am sorry. But I cannot get married to you. My father has threatened he will go on a fast unto death.”

I resigned, went back to Hyderabad and joined a management consultancy firm.  Madhavi and I kept regularly in touch.

Six months later I received a letter from her.

Can you come to Rourkela for one last time? If you are too busy I’ll understand.

I boarded the train the same day.

“Ramen, I can’t stay without you. God knows how much I have tried, but it is impossible. I cannot survive without you,” she said rushing into my arms.

“Have you told your parents anything?”

“No, of course not!  If I get married to you my dad will obviously be very upset but I’m sure he will come around eventually.”

“Then let us get married right away.”

“I’ll resign and look for a job in Hyderabad,” Madhavi said.

“Madhu, that’ll be really tough on you.   Let me try to come back and join Rourkela Steel Plant.”

I approached the management and was told that I could join back but only as a fresh entrant.  I agreed – after all it was a small price to pay for getting together with my obsession.

On 26th March 1988 we got married. Her parents were informed the next day. There was a lot of drama which continued for close to three years.

How did the impasse end? Well, all it took  was a 3 kg wonder and her pristine smile. The moment my daughter Ankita was placed in her grandpa’s lap there was a transformation. He probably realised that any person who had contributed to the ‘creation’ of this angel couldn’t be that big a devil!

On the job front things continued to be tough.  Madhavi and I were both working in the administration section of the Steel Plant.  In the 80s and early 90s when women’s emancipation existed mainly in debates and discourses, being two years junior to your wife was a matter of insult.  It took 12 years of loads of luck, tons of pluck and oodles of toil and sweat to finally break even with Madhavi. Today we are both ‘equals’ in every sense of the term.

A few months ago we celebrated our 28th marriage anniversary.

Related reading: Getting married and staying married…Tete-a-tete with Jammy and Rekha

I paid this little tribute to Madhavi on FB: 28 years of togetherness… a journey of crests and troughs. Thanks Madhu, my eternal sweetheart and best buddy for helping me ride the highs and survive the lows. What makes us tick like a tireless time bomb is my irreverence, your irrepressible nature and our insane Masti Quotient. Many Cassandras had predicted that our ‘run-away’ marriage would not last for 28 days. Well we have proved the Doubting Thomases and Thelmas wrong and I hope we continue to do so till death do us part. 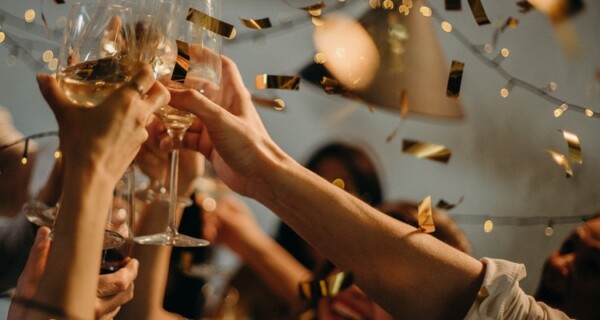