Anuja Chauhan is one author who knows how to touch the farthest corners of your heart through her characters. Her latest book Baaz, too will not miss a stride when it comes to tugging at your heart strings and giving you the feels. I picked up this book as I happened to read one of her earlier books called ‘The Zoya factor’ and had fallen in love with it immediately. Well, who can remain untouched by the charms of the ‘boost brown eyes ’ of Nikhil Khoda( let’s not digress- see this is what Anuja Chauhan’s heroes do to you). And so I set upon to read Baaz with oodles of anticipation.

Baaz is a tribute to our men in the uniform as it entails the story of Ishaan Fauzdar aka Baaz , a small town boy from Chhakahera, Haryana, who goes on to become a fighter pilot in IAF. The book is set during the 1971 India- Pakistan war and apparently reels with dog fights and captures the war in full throttle. But, Baaz is not just a war book brimming with adventure and valour but it also unfolds a love story. The protagonist Ishaan ( Shaanu) is a cocky Haryanvi lad who gets adrenaline rush in jumping across open wells and trains. He joins the IAF as a fighter pilot and finds himself amongst the class of suave , elite, gentlemen officers who know how to follow orders and are trained to kill. Patriotism runs high and that is when Tahmina Dadyseth steers down Ishaan’s life, sweeping him off his feet. Tahmina is a Bombay based Parsi girl, a third generation Fauji brat and the sister of a dead fauji. She is disillusioned with the concept of war and borders and is a pacifist. The ideologies of Ishaan and Tehmina are poles apart and that is what makes their love story intense and unusual.

Anuja Chauhan has a penchant for writing in crispy, Hinglish dialect and she has held on to her style in this one too(thank God for that).The romantic skirmishes between Ishaan and Tehmina have that toe curling, mushy feel to it which is characteristic of Anuja Chauhan. The dialogues between the characters are funny and she has named her characters so wittily that you just cannot stop grinning. Some of the names are- Commanding Officer Carvahlo (known as ‘Kuch bhi Carvalho’) , Macho- Da (The Mukti Bahini Chief), Shaanu’s fellow flyers –Janardhan, Gonsalves and Mansoor( nicknamed- Jana Gana Mana). This sort of quirky wordplay is pure Anuja Chauhanish and makes reading her books all the more delightful. And of course, how can I forget, the instance wherein the children at the orphanage insist on listening to the “Geetu” song which is none other than – ‘Mere sapno ki raani kab aaye GEETU’. The book is enthralling with such uproarious tit bits which makes the ride entertaining.

The conversations between the characters are intense and the best ones are the ones between Ishaan and Tehmina or Tinka as she likes to be called. They are clearly from different walks of life and have different sensibilities and I guess this causes friction but at the same time brings them close to each other inadvertently. The secondary characters are rounded ones and have distinct voices of their own and lends the same to the storyline deftly, be it Tehmina’s aunt Kainaaz Dadyseth, Ishaan’s coursemates Raka and Maddy, his father Chimman Singh Fauzdaar( who insists on him posing in front of a transport aircraft rather than the fighter plane he flies as it is bigger in size) and so on.

Camaraderie and friendship looms large in the fauji world and I was glad that Anuja Chauhan did not miss to capture that bond which Ishaan has with his friends and coursemates Raka and Maddy. Also, the way she depicts the bond between Ishaan and his sisters is endearing to say the least. Life in the fictional Air force base of Kalaiganga is portrayed to the point without any exaggeration.

Tehmina as the female protagonist is feisty, confident and does not shy away from voicing her opinion. She is also rebellious and independent and goes on to act in a soap advertisement, adorning a bikini. She becomes a rage in no time amongst men but that does not seem to bother her much and she is not afraid that it will tarnish her image. Ishaan is the real hero of this story and Anuja has left no stones unturned to make him this swoon worthy handsome lad with ‘Kota grey eyes’ and brazenness which is hard to miss. But at the same time she portrays him as someone who does not feel embarrassed in the least when he tells his girlfriend that his sisters taught him how to knit. He is also least affected by the fact that Tehmina is part of a bikini clad cameo.

As the story unfolded I was immersed into it ‘baaz ke maafik’. It is evident that a lot of research must have gone into writing this book as the 1971 Indo-Pak war comes alive right in front of us. The scuffles between the Gnats, MIGs , Sabres are pacy and do not stretch at all. 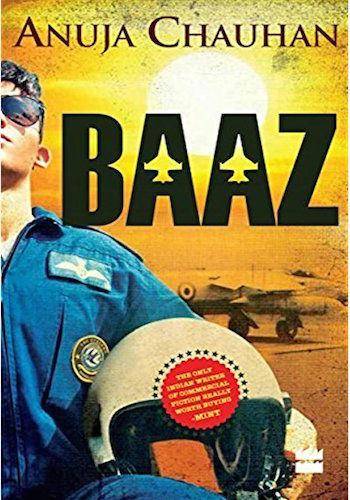 Going forward, Ishaan and Tehmina are drawn towards each other despite their disparate views. But, as a war breaks they cannot help but grow apart as Tehmina cannot fathom the very idea of somebody ‘enjoying a war’ while Ishaan is excited and charged up as this is what he is trained for.

From Bengal we are transported to Dacca, where a war is on in full swing and amidst this tension and aggression , love finds its way for Shaanu and Tehmina. The climax of the novel is as if you are watching the climax of a movie. You can actually picture Maddy’s helicopter dashing on the window as he rescues Ishaan and Tinka and it seems larger than life. I sat in utter disbelief as Ishaan Fauzdar gears up for his last fatal flight. As much as I bawled after the end, I must add that I found the end befitting. The end lingers and stays with you and I felt what I felt when Jack dies in the movie Titanic. It is heartbreaking but it is eerily beautiful. Most importantly, to my mind, it enforces the fact that war is futile and as to how our Faujis are these brave men who are out there to protect us without questioning the thought behind it.

As a woman, married to an Airforce officer for the last eight years, I found Baaz all the more relatable. In the current era of jingoism and hyper nationalism, Anuja Chauhan harbingers a balanced view point wherein by bringing together two characters, she goes on to establish that though war is futile and ‘people are just people’, but at the same time, those soldiers who are trained to protect our country from hostile forces are doing what is expected out of them. I liked the fact that Anuja Chauhan brought forth the apprehensions and insecurities that the family members and loved ones of the faujis are faced with everyday and as to how they still stand strong. I loved the way how towards the end both the characters kind of find peace with what the other person stands for.

All in all, the book is a must read and leaves you with a sense of je ne sais quoi (read the book to know what this means) !!