Why Did The Bride Run Away? 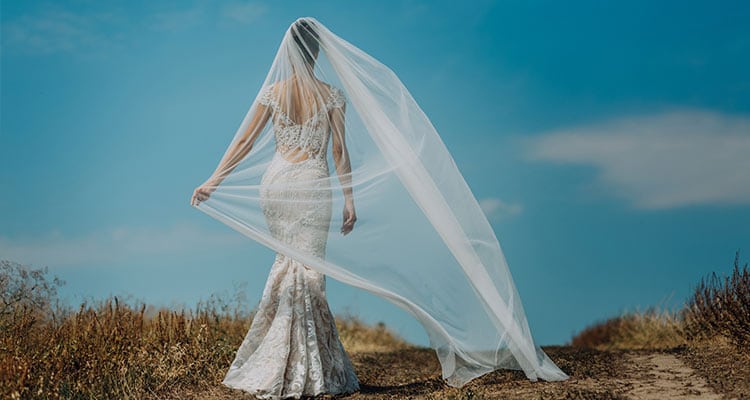 While ambling through the busy streets of Manhattan I sucked in my breath when I thought I saw a bride running away after having exited a building through the fire escape. I stopped in my tracks, the evening light was turning a murky cerulean and my overly imaginative brain jumped to a conclusion.

It was just a pristine white wedding gown dangling from the balcony next to the fire escape. There was no runaway bride. The gown looked so forlorn, fluttering ever so slightly as it frowned down upon me that I felt I needed to find out if there was a story behind it.

The next morning, my curious self went back and asked the local florist about what I had seen. He couldn’t shed much light but chuckled and told me about a runaway bride he had once almost dated but was relieved that he had been spared the consequences.

I mean wedding jitters are one thing but there must have been something much deeper going on here. Having to feel so helpless that running away from your own wedding seems like the only answer, sounds like such a scary thing. What exactly is it that is making people so scared of marriage that a bride running away or a groom leaving a woman at the altar is hardly shocking anymore?

Is it the case of a woman who feels insecure and scared by the sudden realization of having made the decision too quickly? Perhaps she wanted to run away and get married to someone else?

Or is the generation today too fickle because of the vast array of options in the form of dating apps, social network exposure, and the general thought process that monogamy is archaic, as perpetuated by the media with its skewed articles and conversations?

While men are popularly branded as the commitment-phobic breed, a chunk of women develop cold feet at the altar or days leading up to the wedding.

There is always such a lot of buildup around the ceremony, its rituals and vows, the painstaking planning of decor and food, splitting up fixed deposits and trying to please so many people in the process, that the run-up to the holy union becomes rather unholy.

Sometimes the sheer pressure of anticipated responsibilities can make a girl cower and could result in the bride running away. Or perhaps the feeling that you may not really know the person you’re tying the knot with is too overwhelming. Maybe it’s the temptation of going back to a past flame, who by comparison seems familiar ground.

Or the whole idea of being stuck to one person for life that makes one balk at the feeling of not having absolute control over the rest of your life. These are the seeds of fear which propel a person to flee and can make them a runaway bride.

Related Reading: How To Write Wedding Vows (And What You Should Never Write) | 2020

A Bride Running Away Is Not New

Runaway brides existed earlier too. My friend’s grandmother was a runaway bride, but her attempts were foiled. It’s another story that it turned out well for the truant granny but when asked why she did it, she chuckled and told us that she had been the youngest, pampered kid in the family.

I inferred that some of the runaway brides might have been those who had always run away from challenging situations. Which holds true for a lot of men too. Not all, of course, but often those with a privileged upbringing, who’ve had it easy in life, aren’t willing to embrace commitment and the responsibility of marriage and delay it as much as possible.

A few male acquaintances of mine exhibited commitment phobia too, and the reasons were varied.

Some were trying to get married on the rebound but had not given themselves enough time to heal. So, at the eleventh hour, they realized getting married to someone new wouldn’t help and they needed time alone to work on themselves.

Then, there were men who felt they were still too young to get married. Again, part of the blame rests with the media portrayal of how the fun stops after marriage, eventually resulting in people making not-so-sincere promises and then running away from the wedding.

Related Reading: Life After The Wedding And The Honeymoon – Post Marriage Life

They feel like they are missing out on life

What is a runaway bride? It could be a woman who is scared to death by the realization that she isn’t in love with the person she is going to marry or could just be a woman who still has many parts of herself and the world left to explore. It’s an interesting perspective that people shy away from marriage because they want to finish doing other things first. Does that give you the right to just break off your engagement?

If you ask me, I’d advise you against indulging in the bride running away fantasy and make things ten times more complicated.

I’ve had both male and female friends who’ve backed away from marriage just days before they were to be hitched and when asked, said, “I’ve not seen the world yet. I need to backpack. To travel. I need to have fun.” The aspiration to globetrot has fired our imagination to an extent that maybe we’ve become too self-centered, too whimsical, all in the name of a perceived sense of fun and freedom.

Maybe we are not willing to accept that with a spouse the globe-trotting plan might just turn out to be better, I mean who knows? And maybe we should not believe the naysayers so much, who insist that marriage is the end of the road. Running away from a wedding is desperate and a little sad but not heroic. Marriage is what you make of it and not something that will destroy your life unless you let it.

Enakshi Biswas is an ex Google employee and compulsive story teller and considers communication as her lifeline. She believes, like the Google search engine can pull up endless search results for keywords, we all are a search engine of stories, with a limitless repository of stories lying dormant.

Top 10 Keys to a Successful Marriage