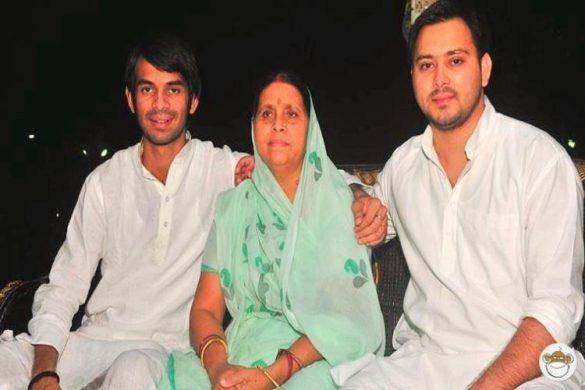 Former chief minister of Bihar, Rabri Devi… (Oops, no! Her claim to fame is that she is the wife of RJD Chief Lalu Prasad!) is looking for ‘desi girls’ for her ‘homely’ sons. Really? It was Lalu Yadav’s 70th birthday celebration when the woman of the house expressed her desire to get sanskari bahus. She added that she wouldn’t like mall-going girls as her daughters-in-law. All she wants is well-cultured bahus for her sons, the most eligible bachelors in town.

Let us remind our Deviji that she once was a chief minister too and managed her house and husband both. Her comment has spiralled into a controversy, with many women and men expressing anger, saying ‘’If I mall hop and shop, I don’t fall under the category of sanskari. And it also means that I don’t respect elders.” Our trolls on Twitter had a hilarious time too.

But let’s face it, folks, though we claim to have progressed, turned liberal and understand gender equality, the real picture remains the same. Mothers and unwed sons continue to look for adarsh bahus who know how to cook, clean and keep the house in order. Unmarried girls with higher educational qualification and bigger pay package are not your first choice.

Marriage is above all of this. It is how two people respect the good, the bad and the ugly. It is how we learn to support each other, grow, prosper and bloom. In fact, going to a mall together helps you bond better. Retail therapy works and looks like our Deviji is yet to get a taste of it.

A song that perfectly goes with the statement

“I Want Sanskari Bahu, Not Mall & Cinema Going Bahu”- Rabri Devi
“Mall Isn’t The Best Place To Find A Lover, So The Bar Is Where I Go”- Son pic.twitter.com/6BtnQyKR3F

You have a ‘mall’ point of view

No mall-going girls for my sons: Former Bihar CM Rabri Devi.
I guess she has so much mall that she’s sick of it.

Some ‘fodder’ for thought

Legit,she wud need someone who can go to Gaushala and get more fodder for the family

Oh, so this is the reason behind her comment

In 2008 Lalu both sons beaten up by youths for eve-teasing at Ashoka hotel & Connaught Place that’s why Rabri Devi want No mall-going girls.

How many types of men have you met while looking for a bridegroom? My count is seven!