How do you know when a relationship is truly over?

Knowing when the relationship is over

In a hospital when a patient passes away, the doctors have to call it, they have to say the time of death and declare it so that it can be noted down and added to the death certificate. Horrid as it sounds, this is one of the many difficult things that doctors have to do as a part of their job. An occupational hazard they are trained for and therefore cannot escape.

A skill similarly ominous though without as much responsibility is the ability to call time of death in a relationship. How can we as normal consenting adults who chose to be in a romantic relationship decide when it ends? What are the signs, and no matter how heartbreaking it seems, when do you know?

Related reading: The best way to get over rejection is to face it

Reach for your bones

Breakups, like fingerprints, are individual, unique and different. How one might wear the pain of it on their skin varies. However, in a few cases, you just know. In your bones, you know that it’s over. Maybe you catch them cheating, or maybe one of you says something or does something hurtful, it’s not specific actions but the feeling is distinct. You almost hear the cracks go through a piece of glass inside you and you know that you’re done.

Listen to your body

My best friend’s parents separated when he was 7 years old. When asked, his mother, one of the true cool women I know, used to say that she saw physical signs of the discord. My friend started stuttering because of the stress, she herself started to get palpitations, her heart literally started skipping a beat when she was with her husband. She knew she’d be dead if she continued and felt responsible for the speech defect her child had developed. She left her marriage and all the parties are now happier. What your body tells you, the way it reacts to your surroundings is a primal warning mechanism you possess. Trust it when it tells you that you are repulsed by your partner, or that you are not happy. Your body can help you break up. Let it. My friend’s mother listened to the body and knew it was over. All these years later, my friend doesn’t stutter anymore.

When either of you begins to lie to each other for no reason. After sharing an intimate space, lying or withholding information is a way of creating distance between you two. This distance, though not created deliberately, is a crack in the pavement that will grow over time. As the lies increase, so will the crack and it will be over. 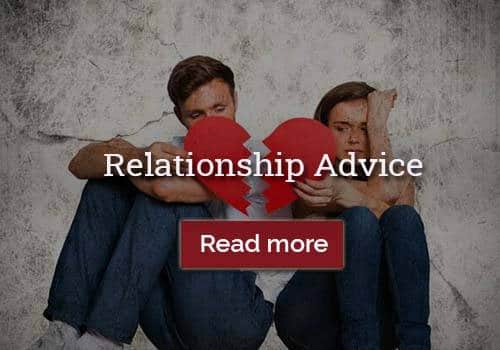 Related reading: These are the things I lie to my husband about

You’re no longer my go-to person

This can happen either before or after the breakup even has happened, but one of the signs that it truly is over is when that person stops being your go-to person for anything that happens to you. When they stop being ‘your person’, you know it’s time to wrap things up. This doesn’t mean that if they don’t call you once after getting good news you should be concerned. It’s not so much action but the unspoken priority that you get in a relationship that’s concerned here. In the New York Times’ Modern Love column, there was an essay by a man whose wife used to cut his hair until he came out as gay and their marriage ended. The essay recounts the last haircut she gave him after the breakup. They both decided then, that was the wise thing to do.

Having that morning tea, kissing when the clock strikes midnight on New Year’s, going to the hill station every year, relationships are made out of rituals and pilgrimages have taken together. When such rituals end, though not always so amicably, it does confirm the finality of the ending.

The lows are lower than the highs are high

The clear sign of a relationship ending is when you’re miserable together instead of happy together. When the fights and showdowns start to weigh more than the kisses and conversations. While having arguments is normal if you are always arguing, what is the point of being in a relationship?

While having arguments is normal if you are always arguing, what is the point of being in a relationship?

If you find yourself wanting to be alone more than wanting to be with them, if you guys don’t talk for a couple of days and you are okay with it, these are signs that you’re okay without their presence in your life. Sad as it may be, it is over.

Saying it makes it true

When you or your partner talk about breaking up, and not in a dark humour kind of way, it might be a premonition. Usually, if you consider breaking up, it might be close to being a reality, but humans are temperamental, so such thoughts may remain just thoughts. But if leaving each other is something that comes up frequently, perhaps it’s time to do just that.

If you haven’t already broken up and are confused, asking yourself, “Why am I in this relationship, what would I be without it?” can be a big help. If you’re afraid of the answer “You will be alone”, then realise that not wanting to be alone, having company isn’t good enough reason to be with someone. Get a dog. My aunt used to say, something I’ve followed like a touchstone, that, “I will not end up being married to someone I barely tolerate, just because I don’t want to be lonely for two hours every evening!” Radical as she may sound, it is worth noting that marrying someone just because you need them to keep you company for a while is selfish, and unfair to both of you. When kindness has left the building

When towards the end of a relationship or after having the breakup talk, if either of you lashes out and says nasty things, know that it’s over. Being kind to each other is fundamental to a relationship.

Being kind to each other is fundamental to a relationship.

You used to share your hearts, your bodies and your soul with each other and nasty language is a sign that that sharing has ended. Also note, if any form of physical violence ever happens in such a scenario, remember it is not only over but it is not done on a human level. If they deem it okay and write it off as passion, they could do it to someone else again. Informing the authorities might seem harsh and final, but you’re doing the right thing.

When you’re happy and you know it

Knowing it is over may not always be a bad or a sad thing. Sometimes some old, broken relationships are dragging people down, or behind. Knowing you both are not carrying that load anymore can be a liberating feeling. Being happy without each other, without ill feelings, is a sign that, it truly is over. Yet how wonderful it was while it lasted!

7 Signs He Doesn’t Love You Anymore

15 signs you are still not over your ex

How to get over a breakup fast?

This Is How Your Breakup Affects Your Pet: A Dog’s Point Of View

How Does A Guy Behave After A Breakup? 11 Things You Didn’t Know

How To Get Through A Breakup Alone?

In any relationship we invest our heart in, we do receive the signs of its success or failure. Deep inside our heart is capable of reading these signs. But we chose to deny them. And when we ignore the subtle signs , they keep getting bigger and more concrete. And the day comes we are in a situation where it is no longer to ignore them, because in the course of ignoring them, we keep on adding damage to our own being. That’s why it is important to be aware of such signs, and even more important is to pay attention to what they are trying to convey. It is a very important and insightful article. Thank you for penning this. 🙂