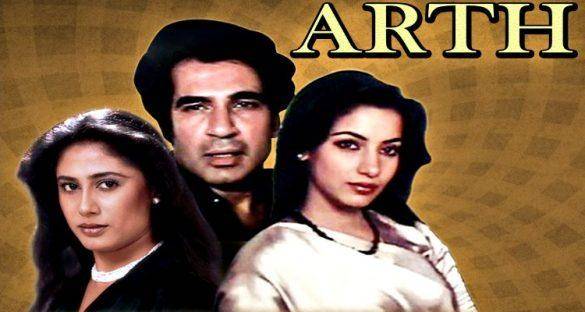 A landmark love story of Indian cinema is now remade in Pakistan – Mahesh Bhatt’s Arth. Not many would consider the movie a love story – yet it is. Because it peels through the gloss of romance to an essence of love which few movies have managed to explore well. Love and security, or perhaps in this case, insecurity. Arth has also been touted as a feminist masterpiece, giving a woman the choice to live her life on her own terms, even if the circumstance leading to the choice itself was not her choosing. But I find a millennial like myself to not be a true voice to the generation that this movie shaped. So I sat with a group of women fabulously in their 50s and above to discuss the many themes this movie explores – love, the other woman, the meaning of life.

A loss of security

“What do we seek from romantic love?” Neeti, 56, asked my ignorant self. “Yes, there’s companionship, sex, procreation – but what we seek most is security. Someone who will have our back, and stick around no matter what. That is why, for many, emotional cheating sometimes becomes bigger than physical cheating. That blanket ripped off, baring you to the cold. Which is what happens with Pooja when Inder confesses being in love with someone else. Juxtapose that with her childhood in an orphanage, and the value of the security blanket increases tenfold.”

“Exactly! This insecurity-security conflict was really brought out well and what hooked me to the movie. Because no one who thinks they are secure is so. Pooja thought she is secure because she has a house, but actually she just lost her husband. Kavita spends almost the entire movie trying to find that security and when she gets the man, she realises if he could not be faithful to a wife of 7 years, what is the guarantee he will be with her?” adds Rashmi, who was 24 and newly married when the movie released. “Made me look at my marriage and what to expect in a new light.”

Not an object of hate

The Smita Patil fan in the group, Shashi pitched in, “Insecurity is inherent in a relationship born of infidelity. And it is this realisation that makes Kavita not want to marry Inder. Because she realises after meeting Pooja that actually Pooja is more secure, even though she has the man. Patil really brings that character to the fore. I still remember her line, ‘I just wanted to make my house, not break yours.’ And Pooja replies that house was never hers, so it’s not hers to give. Kavita also understands that Inder can never be hers as well. Somehow after the movie I didn’t come out hating Kavita – rather I pitied her, understood her, and even applauded her to an extent.”

“You know if we talk of understanding the other woman, then perhaps no one understood that better than Rohini Hattangadi’s bai. How nonchalantly she says of the woman her husband is cheating on her with, that she is also in an equally pathetic condition, if not worse. She shows Pooja the value of struggle and the resolve to fight for her child – even if that sends her to prison. Pooja, who thought she had no idea about love, came face to face with it – the true love of a mother for her child. And I think she realised that’s what she wants in her life. I showed this movie to my daughter before her first child – and we both had tears in our eyes in the police station scene,” new grandmother Angela shared.

What about the movie’s title? “Well, it is as Raj’s character says – what is life for you? Do you determine its meaning or does fate? Do you define its meaning or does your partner? And each character actually adds their own two cents to these – Raj, the housemaid, the best friend and her husband, even the roommate in the hostel who is very clear she wants to get somewhere in life and is willing to compromise for it. The movie’s direction also imparts meaning to every scene. Take the fight scene, for example, between Inder and the jeweller whose ad he was shooting. The businessman insults Inder and Kavita’s relationship – and Pooja rescues him. She even takes care of him when he is bruised. But there comes a time when she says she will neither help nor rescue him anymore – when he comes back to her,” Rashmi added.

Related reading: Why do single women fall for married men?

The meaning in your life

“Yes, and what about the look of each scene. Watching it for the umpteenth time with my daughter made me pay attention to things I had missed. Like in that iconic scene between Pooja and Kavita – you see Kavita towering over Pooja initially in their confrontation. As Pooja remains calm, she and Kavita come face to face on the same level. And then Kavita gets down on her knees, now with Pooja towering over her – and all this while Pooja didn’t move an inch! Here was a woman who dictated such pain in her life, and she sits dictating her every movement,” Angela adds.

Watching Arth makes you find answers and questions on the meaning of both life and love. Love is more than just romantic, it is more than sex, and perhaps not more than our own sense of self. As Raj tells Pooja, she is truly born the day she sheds all other identities but herself. Yes, we are all mothers/fathers, sisters/brothers, daughters/sons, wives/husbands – yet is this all we are? Life can find meaning in its own pursuits, in accepting some direction it may take us and forging others. And, as Pooja rediscovers in the film, life can just as well be about love too.

Why Is It So Hard To Let Go, Even If The Person Doesn’t Love You?

How the spiritual element made our sex even more intense

Mallika Sarabhai’s mantra for women: do what liberates you, don’t wait for approval from men