What is PMS and why are men afraid of it

Pre-menstruation syndrome, or as we know is, PMS, is a tricky thing. Its symptoms cannot be put down into neat bullet points for they vary from woman to woman. But yes, it is NOT a myth and No, it is not just an excuse woman give for their crappy mood or depression.

So, what exactly is PMS you ask?

Premenstrual syndrome or PMS is the term given to the psychological, physical and emotional discomfort that precedes (a week or two) the menstruation cycle. The causes of PMS are undiagnosed or not fully understood. What the doctors and scientists do know and understand is that the changes in hormones in women’s bodies might play a big role in PMS.

Let’s break it down scientifically

The levels of progesterone and oestrogen goes up and comes down during the luteal period. This fluctuation of hormones affects the brain as much as they do the ovaries. These upheaval of hormones result in mental and physical discomfort. The changes in hormones can cause real displeasure in sexual intercourse, mental acuity, emotions and physical sensations. The causes are real, the reactions are real.

So why are men afraid of it?

Phil Dunphy, Claire’s loving husband from Modern Family, sums up the way men feels when his wife and two daughters start menstruating on a very important day. According to him, “it happened. Satan’s trifecta. The day I most dreaded had fallen on the day I most loved.” Like Phil, we have all come across a Phil in our life who has limited knowledge about what menstruation and pre-menstruation actually is. Real or not, most men I know define a girl’s crappy mood as “That time of the month, eh?” Many women get offended by the matter-of-fact tone but little we do little to let them know what it really is.
Having asked a few men around and their thoughts about what PMS is, most of their worries are valid. Somewhat.

Men know periods for women is an emotional time and they are on board with that. The PMS, on the other hand, springs on them suddenly, out of the blue. I have seen men tip-toe around me and take long pauses before they say what they want to say probably because they are scared what my reaction might be. PMS is just another sign that your “time of the month” is nigh. PMS-ing is the silent alarm that goes off before the flood hits the shore. As it is, menstruation for women is painful. Without the full knowledge available to us, PMS signs will vary from women to women. So, for the men, signs vary and varied signs leave them confused, clueless and at the end of the day, helpless. Your girlfriend / friend/wife might have craved hot steaming cup of coffee last month when she was PMS-ing, she might not even be sure what she wants when she is PMS-ing this month. So before you get her flowers to cheer her up, it’s better to get chocolates, ice-creams, biryani, pizza ready as backup. The feelings of helplessness for men is as real as the cramps that she get every month.

3. The cramps are real

Now many men often bombard women with the question “How bad could the cramps be?” Imagine yourself getting skinned. Now imagine that inside the uterus, every month, for five days. The uterine walls sheds its wall every month causing vaginal bleeding. There are very few women with high threshold for pain and can get by these days with no discomfort visible on their face. They can even pull off Cersei’s straight face with no effort. But for the rest of the women, the cramps get really hard, really unbearable and for the unfortunate ones – there’s bleeding, acute stomach cramps, nausea, vomiting and the general feeling of passing out.

Read more: 6 signs to know that your man is losing interest in you

Yeah, she might be a little short with you during her PMS stage, bear with her; unrelenting physical discomfort will leave a person cranky. It is confusing (and scary) for a man to who just can’t understand what pissed her off or made her cry. Hell! It’s confusing for the woman herself not knowing what made her cry! One moment she is laughing at a joke and the next moment you might find her staring at herself in the mirror contemplating how time went by so fast and how old she has become (even though she is just 23). She might yell at her best friend and talk smoothly with the pervert neighbour she hates. Mood swings is a valid pre-menstruation syndrome and well out of her control. Bear with the symptoms. She is just PMS-ing, she is not the next Ted Bundy. 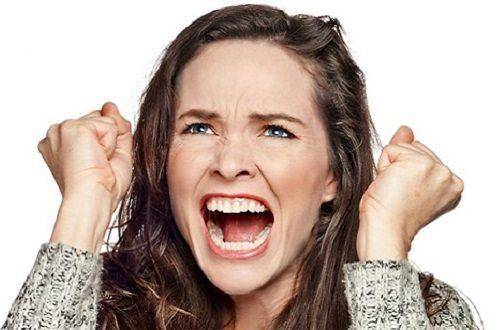 Fun fact, men -We hate PMS as much as you do. And sometimes, we are terrified at our own self to have yelled at the kid riding his cycle too slowly. Sometimes the sun hurts our eye too much and the incoming ebb and flow of blood is not what we look forward to every month. But ever since we started “chumming” since the age of 12, we have learnt how to wait out the serial killings in out uterus and patience is the key. PMS is not here to stay forever (like the corrupt governments we keep having). If you can tolerate the idiotic, mass killing of logic, you are patient enough to deal with the PMS for five days.

Next time you are in conversation with someone who is PMS-ing, just tell her how strong you think she is and slip her a packet of ibuprofen, flash her a genuine smile and let her know you will order a large pepperoni pizza for her when she gets home.See that Satan’s Trifecta become Eirene in no time.

Women Who Wrote the Destiny Of Nader Shah, the Most Powerful Ruler of Persia