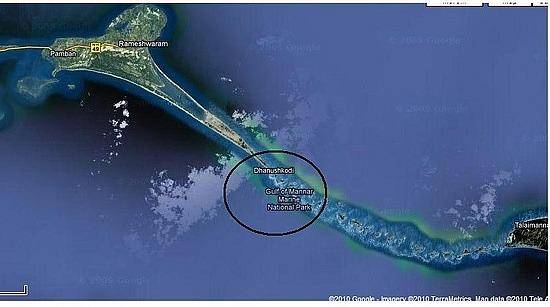 The journey from Bangalore to Rameswaram (Tamil Nadu) is around 570 kms. The Ramanathswamy temple is one of the twelve Jyotirlinga temple.

As we stepped our foot on this location alighting from the bus, the notes in our wallets attracted the rick owners who immediately circled us demanding a non-negotiable flat 100 Rs for a distance of 3 kms. We parted away bringing disappointment to their faces and headed into a local bus. We ended up saving 90 Rs as the ticket hardly costed Rs. 5 each – must say, pretty economical.

We quickly found ourselves in the TTDC hotel, a stone throw away from the temple. The hotel is spread on vast area facing the sea and houses many rooms catering to all types of travelers (budget to sea view).

After a quick freshen up, we headed to honor the various rules of the land, starting with taking a holy dip in the sea water (Agni Theertham) and continued our footsteps to the entrance of the temple, with water soaked clothes on. The entrance to the temple costs Rs. 25 each which also covers importantly a holy bath at each of the 22 wells (Tirthas and each having significance) within the temple premises. Walking the path to the main deity, the waters continued to soak us time and again at each well, splashed over our heads, drawn out from the wells by the designated temple staff. An experience which once our Mom blessed us with, back in our childhood. We dried ourselves in the hot sun before heading to the main deity as meeting the Lord in wet clothes is not permissible. Continuing our journey further and crossing a long line of devotees we finally had the darshan of the Lord which was fulfilling pleasant experience.

After finishing the visit to temple, we decided to head to Dhanushkodi, around 22-25 Kms away. After taking some decent amount of rest, we proceeded to catch the local town bus to Dhanushkodi and the fare costed 11 Rs each, as usual worth the penny paid. We soon engulfed into a lonely dry deserted road to catch the glimpse of the sea (Indian Ocean) on the right side and a brown dried up sea bed hiding the sea (Bay of Bengal) behind it far away, on the left side.

The bus came to a dead halt at its last stop, though the end tip of the land was another 3-4 kms ahead but entry beyond was restricted. We inquired the reason and found that the road was constructed three years back but was supposed to be inaugurated by the PM of the country and until then the use of the road was not permitted. The deserted road hardly had any shops and if one wants to avoid making their stomach turn enemy, its best to replenish your food basket  when in town and carry  a good amount of water with you.

We had to strike a deal with one of the van guys to reach Dhanushkodi point further, who took along a houseful of other visitors via the dried up sea bed and charged around Rs 150-180 per head. The van (highly depreciated exhausting its utility saturation point) started its journey towards the Bay of Bengal sea and pulled itself with great effort obeying its master’s order on the dry bed and drove for around 5 kms. The van driver indicated that due to lack of rain, the whole sea bed had dried up over the years and the sea too never tried to conquer this piece and had chosen to keep itself far away. On reaching, we were greeted by a bluish green sea (Bay of Bengal) which was lazing itself calmly, relaxing under the scorching sun and allowing some boats do their rounds. The beach was quite clean and scenic and one could spend decent time in the peaceful atmosphere (very sunny and hot though) with the friendly slow waves touching the feet with care, but as the van driver had allotted only 30-45 minutes at this place we had to soon bid goodbye to continue our journey further to the abandoned town in ruins. We were informed that the nearest point of Sri Lanka was just 30-35 kms away from this point and the famous Ram Sethu which once connected these two countries had chosen to hide itself deep down in the layer of the sea.

Reaching the ghost town we were explained about the presence of an old railway station which was destroyed way back in the 60s leaving hardly behind any traces of tracks, platform. A small temple houses the stones having properties to float in water. Walking a little further, we found an old church beyond recognition facing the clean blue Indian Ocean sea. The ocean was quite rough, roaring and lashing its waves on the shore, challenging the Bay of Bengal to wake up. I immediately turned to the left to catch the sight of Bay of Bengal which continued to laze around. The sight of this two seas was certainly surprising – one extremely active and the other least bothered to react. The place is quite scenic and will transform one into a tranquil state as one rarely gets to be greeted by the two seas but the eerie feeling of the dead town does remind that the same natural beauty, when in anger can swallow mankind in its fury. After spending some decent time, with a heavy heart and relaxed mind, we returned back to our hotel.

An introvert exploring life travelling, writing & smiling. Life is an interesting journey to discover oneself.

How to get a boyfriend in 30 seconds