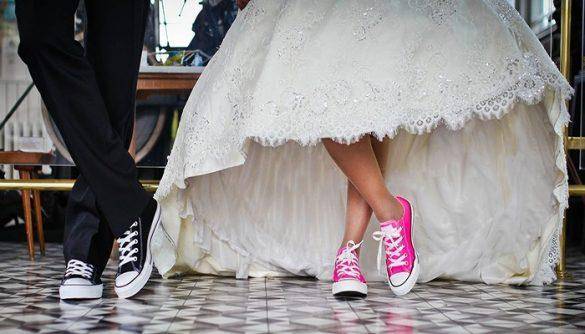 One fine evening, I was jogging and listening to Enrique. Suddenly, this stunning girl crossed me from the opposite direction. She wasn’t impressed with my handsomeness. I turned and started following her. After following her for 30 minutes, I decided to banter with her but she stopped and jumped into her car and disappeared from the park.

The next day I waited for her but she did not come. After two days she was jogging at the same time in the same park and I was ready. I approached her, and before beginning the jog we had a heart-to-heart in which I complimented her on her smile. Her name was Monica. Soon we exchanged numbers.

We spoke on the phone and met on weekends. Soon, we were like best friends and then realised that it was more than friendship.

Three years into our relationship we decided to get married, but there were hurdles. She was from Haryana and I’m from south India; she’s a Jat and I’m a Christian.

When I told my parents they were happy that I was finally settling down. On the other hand, her parents forced her to quit her job, leave Delhi and confined her to their house.

She didn’t want to go against her parents’ wishes. On the other hand, she loved me, and didn’t want to marry anyone else. Months passed, the wait was long and the phone was our lifeline. I suggested we could go to the police, but she didn’t agree.

When I told my parents, they said “Bhaga ke le aa.” I was so shocked I asked them to repeat what they’d said. From Delhi I had to reach Panipat and elope with a girl from Jat land. This operation needed proper forecasting, groundwork and synchronisation. The first thing I did was to plot the route into the enemy area and the route out to vanish with the girl. They had to be different in order to confuse people. My brother hired a XUV for fast mobility and ease for off road terrain. My best friend Rajat brought his car to go to her place. The idea behind two cars was to change midway after fleeing with the girl and both cars would take two different routes. My father is a lawyer; he was all set to bail me out in case of police action. Once we had a plan, I called Monica and asked her when she could come out. She said she could go to the nearby bank, but with her brother, as she wasn’t allowed to go out alone.

D-day was decided and we started early morning from Delhi, reaching Panipat at 10. My brother in his XUV went ahead and waited outside Panipat on Ambala highway. Our wait wasn’t long, and she arrived with her brother. I texted her to get rid of her brother and come to the bank entrance. She entered the bank and after ten minutes she texted she had reached the door. We quickly accelerated and reached the entrance, I pulled her inside the car, and Rajat rushed towards Ambala highway. Her brother saw us and came running but we vanished. He began following us in his Jeep. Rajat was nippy, and, as soon as we reached the highway, we halted and changed cars.

We raced towards Chandigarh and Rajat turned towards Delhi. Her brother fell back.

Soon Monica got a text that her brother was bringing the police, because everyone thought she was being abducted. Her family was frantic when she wrote back that she was going willingly.

The police alerted the toll booths along the route, but by the time they circulated photographs we had crossed Ambala. I had booked a flight for both of us. Chandigarh airport is on the outskirts, so we avoided the police. Before catching the flight, I called my father. As soon as we went on board, we heaved a sigh of relief and dozed off. My father was waiting with family friends at Delhi Airport. I called Rajat to make sure he’d reached back safely.

Monica and I had a court marriage after two weeks and she was welcomed by my parents. Her parents disowned her. She still feels wretched that her family doesn’t want to speak to her, but I keep telling her that with time everything will get back to normal. Nevertheless, we both are happy and still truly and madly in love.

Raul Sodat Najwa is a blogger, traveller and lover. He’s fond of reading books and music. He likes to meet interesting people and make new friends. Philosophy: High on Life