How Smitha discovered a common connection with a transgender woman There was a funny story Achan told us when we were little. It was about how as a young man, new to Mumbai from a village, he had encountered a group of transgender women. He described how after a long day at work, he had returned to his over-populated hostel room in Shivaji Park and dressed with care and a song, for a much awaited evening out with friends. He had chosen the best of his modest clothes and pocketed some of his meagre funds. Almost all his wages went to his family in the village or to the university for his evening classes. There was precious little left, so this was special.

He set out, fragranced with talcum powder and youthful desires, only to be stopped by a group of hijras asking for money, in their customary way. Achan blustered nervously, wanting to be all man, knowing only myths and anecdotes about the legendary hijras. He tried to be tough, aggressive. He was a novice at this game, they were veterans on home turf. Achan told us of his ritual humiliation at their hands, the scuffle that ensued, the pain and anger he felt when he had to hand over his money. He returned to his room, dejected, in rumpled clothes. In his retellings, Achan could laugh at himself, knowing the years had produced a sea change between that naïve youth and the accomplished man he became. The story stuck with me as much for its comic nature as for the vulnerability of that young Achan.

Related reading: I was afraid of them

Achan had trained us for traffic light stops, which is often when groups of hijras descend on the stationary cars, demanding money. He made us roll up our windows, avoid eye contact, stare stonily ahead and pray for the lights to change quickly. They sometimes defeated his manoeuvres; like the time one walked up calmly, opened the passenger door and placed her hands on Achan’s shoulder. None of us reacted as he handed her some cash and she thanked him sweetly. After that, our routine at traffic lights included locking the doors. 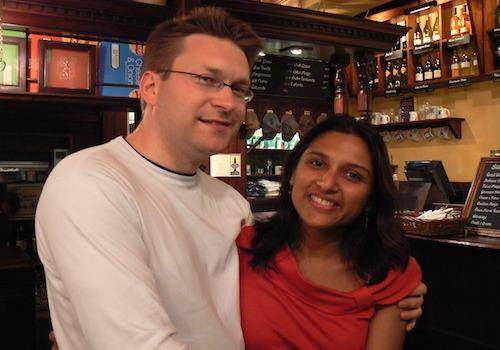 A rite of passage

When I brought my husband M to visit Mumbai for the first time after our wedding in England, one of the pearls of wisdom I passed on to him for his tourist’s arsenal was Achan’s trusted defences at traffic stops.
One evening, we were returning home in an auto after a lovely time with friends, secure in our together-world. We didn’t notice when we stopped at a traffic light in Sion. By the time I saw her, she was right next to our auto. No doors to lock, no windows to roll up, only stony faces to avert and resolute silence to keep.

Related reading: What makes her a woman?

M laughs sheepishly when nervous. I made him nervous by pinching him furiously, to warn him. By the time she sauntered up and placed her hand on him, shimmering sari and tinkling jewellery clothing her masculine, surprisingly graceful frame, M was looking straight at her and chuckling. Disaster. I broke with training and confronted her, defending that young man from years ago. I was gruff, rude, demanding she leave us alone. Abruptly, she put her hand up, indicating I should stop, with a face wise with living. She turned to M and smiled, “You are a pretty man.” He just laughed some more, not understanding the words, but knowing he was caught in an awkward foreign tourist moment. Without taking her mesmerised eyes off M, she asked me, “Can you please tell him? He has beautiful eyes. Green-blue like the sea.” I sat quietly frozen. She gave me a few moments and then insisted, “Batao inko. Please.” I translated for M.

In a few more moments, the lights changed. Her face changed too, the softness passed. She broke into loud smiles and exclamations, “God bless your marriage. Khush raho. Myself Kalyani. Remember me!” She clapped her hands in that distinctive way, pushing her palms outwards, as if gathering and dispersing blessings on us. Then she was gone in a swirl and we were moving.

The driver’s shoulders shook with suppressed mirth. M apologised to me repeatedly. I reflected. Kalyani had swayed into my little house of prejudice and rattled it. I had always offered fear and suspicion when I saw them. We were caught in an unconscious ritual, they were outcast aggressors, we were self-righteous judges. Kalyani found beauty in M’s eyes, as I had done in a million moments of love. Kalyani was a woman just like me.

5 signs that you’re satisfying your woman in bed

Am I immoral for loving three men?

A wife, mother, dreamer, storyteller and friend. Happiest when I’m around food and friends, reading, watching a good film, dreaming of my childhood in Mumbai or listening to the tales of my kids.

When in a relationship, are you dominant or submissive?