Shiva and Parvati: The Gods who stand for Desire and Creation

“What is it, that you know always, that all the yogis always want to know?” Devi once asked her beloved Nath, Shiva. Shiva laughed, and then spoke exaltedly like a poet, “This earth upon which we sit, the hills, these trees, the springs, this soft wind, even the moon! The sky! Those distant stars that bejewel the night as offerings to you, dearest,” He exclaimed, arising, “The entire Universe is a projection from me, this human bodied Yogi you love – your husband, Shankar!”

“A projection from you?”

Shiva is the creator of the world

“Yes. I am the creator of this world! I am always the knower of the highest transcendence, I am the eternal knower of what eternity means.”

The Devi was impressed, but “Oh! If you are the creator of the whole world, then, where do I fit in?” she asked teasingly.

“You,” he urged emphatically, “Are the embodiment of Shakti, my inseparable power of dynamics, without you, I cannot create!”

“Without you, there would be no manifest world, Parvati, and I would remain forever, in my transcendence, by myself.”

“There is a time in the Universe, Parvati, when there IS no Universe! Just pure being; the primal ‘Isness ‘ or pristine consciousness, a sort of divine luminosity, which is absolutely absorbed in itself, for thousands of years. But then, there is a stir… a desire….”

“The pure being desires?” asked Parvati.

“If God does not desire, there is no need for creation, life, and God itself. The God of “no desire” can only rest in that pure light, in a deep slumber. Why should He go for the dynamics of creation?” 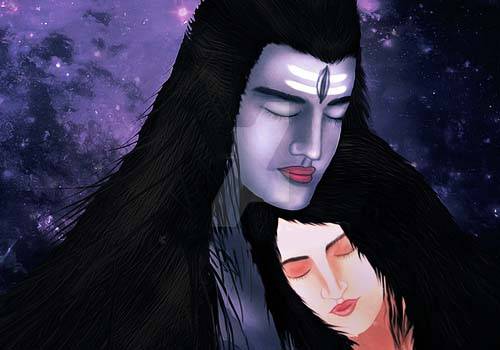 “Then, there is that stir! And the God of desire begins to vibrate!” said Shiva, changing his tone dramatically. “This vibration is my very Nature. I always aspire for play, for adventure! I am not content with just tranquillity! I NEED to manifest, need to reflect my own power of creation, to put it to use.”

“Shiva’s mantra is not just Om Shanti, it must culminate in Om Anand, ultimate bliss at all levels of existence.”

“Wow!” Parvati smiled. Shiva continued, “And so this beautiful miracle, that tonight we sit as two beings in love, chatting, admiring each other and our surroundings, such a beautiful creation, of which we are now a part, and yet I tell you, the secret is that we are the perennial source of all that is…”

Even as Shiva was expounding the Tantra of Sristi Rahasya (secret of creation) to Devi, a trickle of water on their cave wall began solidifying, in the form of a magnificent LINGA of ice.

“See my dearest, this beautiful Linga,” continued Shiva. “It brings to mind a subtle truth, that water and ice are one, and yet each contains the other. Ice is latent in the solidification of water. And so too water is always present in ice, waiting only to be thawed. Just the same way, in each man, is the sensitivity of a woman, and in each woman, the courage of a robust warrior.

The linga is a symbol of love

“This linga is a symbol of our love; a reminder of our eternal togetherness, a manifestation of the eternal principle of Shiva Shakti. Let us celebrate love, union, manifestation replete with all its sensuality and sacredness, let there be communion between the manifest and the transcendent!” declared Shiva.

“How beautiful are your words! But when shall my children get this vision?” asked the mother, latent in the bride.

“In due course of time! The world has just been made. Let the children play out their stories! Let them experience, let them wonder and then, let them seek! What is changeless? What is immortal? And where did they all begin? Any being who does the sacred trek, and reaches our cave of primal love, shall be granted Amrita, the realisation of immortality.”

This was the divine prelude to Amarnath, where the ice shivlinga forms every year to remind the children of their sacred heritage.

“Shivratri is Shiva’s birthday,” say some.

Others swear it’s his wedding night with Parvati, some opine that it’s when the Ananda tandava, ‘the first dance’ began.

“Oh, so then my Lord, which of the three is it?” asked Parvati.

And then did Shiva hold her in an embrace, and locking his eyes in hers, whisper, “All three, my Devi. When I am united with you, it is all the world in a moment.”

(Shail Gulhati is the author of ‘Shiva, The Ultimate Time Traveller’. Available on Amazon books.)

Bheeshma’s Oath: Was It Only for Satyavati and Shantanu or Was It Something Else?

Sometimes We Arrive At Our Life’s Purpose Through Marriage; Like Subhadra For Instance

Shailendra Gulhati is a Jammu based Shaivite author who has 5 books to his credit. He has been called upon to participate twice in the SAARC Writers Summit as also in the Festival of India held at Thailand.