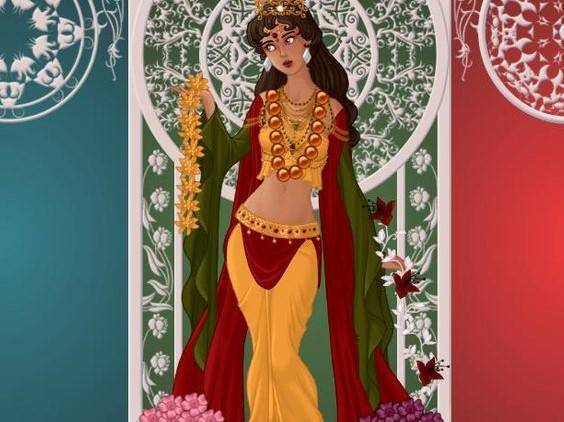 Renuka was following a vow when she took permission of her husband and went to the river to bathe.

While returning after bath she was awestruck by a scene which was uncommon for her experience.

She saw a King sporting in the water of the river along with his wife. She was bewitched with this royal, beautiful couple and thought to herself “I have never seen such a handsome couple!”

The couple’s dalliances in water, their wet clothes and glistening bodies wrapped in an embrace with each other – Renuka let her sparkled eyes drink into the entire scene oblivious to the rapid throbs of her heart, rooted to a spot as a statue while her thoughts took her on a trip of fantasy and excitement.  A burning desire to experience similar passion and ecstasy for herself aroused in her mind and Renuka blushed. But immediately her longing gave way to a feeling of shame and guilt and her pinkish face turned pale.

With mixed thoughts, Renuka came back home- her humble hermitage. She was a chaste wife of Rishi Jamadagni, a man whose face always beamed with pride of his own erudition and piousness of his loyal wife. When Renuka entered the threshold of her house, Rishi Jamadagni was sitting in meditative pose but as soon as he heard her footsteps he opened his eyes and looked at Renuka who was moving around the house now performing the daily chores but her face gave away her absent-mindedness to her keen-eyed husband. In the same out- of- mind condition, she failed to realize her clothes were dripping still. Jamadagni noticed it and seeing her lustre- less he flew into a rage, for he realized his wife had succumbed to something.

Jamadagni now satisfied and pacified, pleased with his obedient son he asked him his heart’s desire which  will be granted immediately and Parsurama requested to revive his mother and give back her life and that he must be free from the sin of matricide. All these were granted.

This tale appears in Mahabharata and many Hindu Puranas and the mother in this story is deified as Renuka or Yellamma worshipped in many places of our country. She was a woman who was chastised by her husband for admitting to her desire for pleasure and by her own son who unquestioningly submitted to his father’s demand of punishing her. No questions asked, no answers offered, only a decree declared by a man who probably felt offended and uncomfortable when faced with the revelations of needs and fantasy of a woman of his life.

Did it hurt Jamadagni that his wife thought of pleasure when she was away from him? Did he use this punishment out of fear for losing the adoration and respect from his otherwise submissive wife which led to extreme temperament bringing out such wrath on Renuka? Was it that the passion and fantasy of  a simple woman appeared intimidating to this intellectual and aristocratic man?

In the story of Renuka, the severance of head gets associated with sexual guilt and lack of independence such that even in her thoughts she cannot imagine about her own pleasure – an approved code of conduct for a wife. When the head was severed, Renuka is incapable of thinking, feeling and developing a perception and she was caught in her own body without its head, a body which cannot emote and contemplate and is a way to convey an unspoken doctrine to all and one.

With her revival she was elevated as a Mother Goddess, a status wherein only the maternal emotions matter.

Yes, becoming a mother is the most satisfactory phase of a woman’s life. It’s her rebirth too. But isn’t she boundless? Such pertinent questions if pondered upon may seek answers for women on their liberty of expressions as well as create awareness for their male counterparts to recognize and appreciate feminine individuality.

I am a Corporate professional currently associated with a Foreign Bank. I am an avid reader on the subject of Indian Mythology and at present pursuing Advanced Diploma in Comparative Mythology from Mumbai University. My years of reading on Indian mythology has stirred the passion of writing on this subject which I now pursue through my blog  -https://shwetinsights.blogspot.in/. Do read this blog if Mythology interests you and leave your comments.

Packed with thought provoking thoughts and raising important questions on an age old notion of patriarchy and oppression, this blog came as a fresh piece of blog.

You thought there was only one way your partner could cheat on you, didn’t you? Find out the truth.