Planning to finally propose to your love? Made a decision about your relationship? Finally ready to take on the endless, “When will you get married” or “Are you married” question from relatives and family? Then here are a few  legal and social things you should do before a wedding to have a happy married life.

While walking down an aisle and saying ‘I do’ to your better half is the most magical time of one’s life, it is also equally important to finish some of the more practical considerations of a new marriage before a wedding as an Indian newly married couple.

6 Legal things you should look into before a marriage

While contemplating a marriage is a matter of the heart, it’s also important that you involve your head and prepare yourself for it beforehand so you ease into life after marriage. Apart from the wedding ceremony and rituals, here are a few things you must take stock of and carefully consider before the big D-day arrives.

1. Apply for a marriage license

This is the first and most important step that you must know and take while getting married, that will legalise your marriage. It not only legally secures your marriage as a newlywed, but will also safeguard the partners in the likelihood of a separation or if things go astray or if there is a demise of a partner. 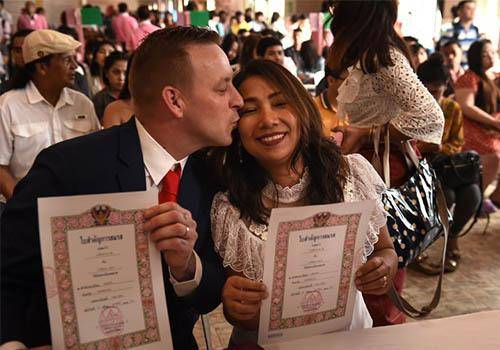 Among the important documents required include submitting details of your age proof and location proof via your Pan Card, Passport, Aadhaar Card or driving license, your tenth standard leaving certificate along with 2 passport size individual photos each, your wedding invitation, your wedding photo together, a copy of divorce if necessary, death certificate of husband or wife if either partner is a widow or widower.

You will also require to have 2 witnesses present with their ID proofs for acquiring the same at a district registrar’s office, pay a minimal registration fee and you could have the document between 7 days to 3 months after the marriage registration.

2. Marriage laws are different according to religion

As a married couple, your marriage has to be legalised under the existing laws in our country and here your religions become important. The marriage laws are different for people belonging to different religions and communities.

Here it would help to check with a lawyer beforehand about the laws or read up the various laws provided for interfaith or inter-community marriage for newly married couples in the constitution. 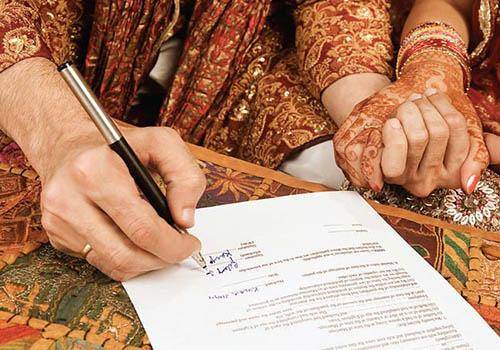 Under the Hindu Marriage Act, both the husband and wife need to apply to the sub-registrar under whose ward the marriage was sanctified, or to the register centre under whose purview either life partner has lived for something like a half year. They have to produce an affidavit stating place and date of marriage, marital status at the time of marriage, date of birth of both partners and nationalities of both.

3. Decide on your name change

Optionally you can go for a Joint Notarized Affidavit from an open legal official. This will aid your name change in important documents like PAN Card, Aadhaar Card, bank records etc. While usually women tend to change their surname after marriage, these days many Indian newly married couples are keeping their original names and surnames after marriage too.

4. Discuss your partner’s past

Remember in India marriage is not just the union of two people but also of their families which would also include previous debts, assets, children from a previous marriage among other things. Take the time to find out your partner’s family relationship and also whether they have had a previous marriage or children.

Try and have as many less secrets in your newly married couple romance after marriage so that you can enjoy a long and fruitful happy marriage. These factors become important as you look to legalise you marriage as a new couple, so ensure to have a discussion beforehand.

5. Things to look into in case of a second marriage

If there has been a one-time settlement after a divorce or if your partner is paying a regular alimony. If yes, how much it is and how much will be left from his earning to run the show when he is married to you. It is also important to know what kind of custody your partner has about the children and what is expected from you as a new parent.

Find out the kind of relationship your partner maintains with the ex partner. Is it just cordial or is it that they are still in the joint decision making stage.

This is something that people usually don’t do in love marriages but this is the most important thing to be discussed. Before your marriage, do discuss important aspects like property, finances and immediate family of your partner. While talking finance specifically, do remember to discuss everything from credit cards, bank accounts, retirement plan to pre-existing loans or debt and your partner’s spending habits. This would also give a fair idea if your partner is financially sound and what you need to do in case everything is not up to the mark. Discuss debts (if any), existing loans and assets with your partner. This is important as debts and assets you incur may become marital property after your marriage and would be split during a divorce. These include wages, interest earned on investments and home. Work out a proper saving and investment plan with your partner and start a joint account to have more transparency in a husband and wife relationship.

Also have a contingency plan worked out for emergencies and opt for a health insurance to cover both of you and shockproof your happy marriage against future medical emergencies.

8 most common problems in a marriage

5 Conversations To Have Before Marriage To Avoid Complications Later