“Okay, I will do it for her,” was music to my ears. The path that led to this nod of approval had been so tumultuous. I wanted to call her up and tell her that he had finally agreed. No, wait, there’s nobody to receive calls on that number. Maa would have been the happiest to know that Baba had agreed to a shunt being inserted into his brain, but Maa wasn’t there with her ‘I had told you long back’ look.
We’d watched Baba’s neurological degeneration over the last few years from a perfectly mobile and independent, retired person to one who clung to the wall to take baby steps.

Travel by air was even more chaotic – wheelchairs and airport assistance were a must. What eventually happened was that Maa became overburdened with her own life and having to do everything for Baba as well. It didn’t help either that she was from a generation that looked at external help as unnecessary expense.

Well, to cut a story of many years short, our efforts to convince Baba to undergo brain surgery (in layman’s terms) were vehemently opposed. I oscillated from requests to threats to try and make him see sense, but finally, we let it be and let nature take its course. While both of them loved travelling and had all the time after retirement, Baba’s lack of confidence and staggering movement didn’t allow them to travel as much as they would have liked. It was a self-imposed house arrest of sorts.

In the first quarter of 2016, we decided to go ahead with Maa’s knee replacement surgery. She’s always been an emotional and psychological rock, never mincing her words. Her knee was her only physical flaw; she was ‘in perfect condition’ in her words. A fortnight before her scheduled surgery, we got all the routine pathological tests done and got a green signal from the doctors. Baba, who was then in Kolkata, flew down to Bangalore. Little did he or she realise what the next evening had in store for them.

Like most Indian households, IPL fever was running high in ours. Maa and Baba stayed glued to the television. The next half an hour was the darkest in my life. She complained of breathlessness and collapsed. By the time the ambulance came, she was no more. What went wrong for my ‘in perfect condition’ Maa? Completely unaware, Baba sat near her feet on the bed, rubbing them, hoping to warm them enough. He had not yet figured out the truth. 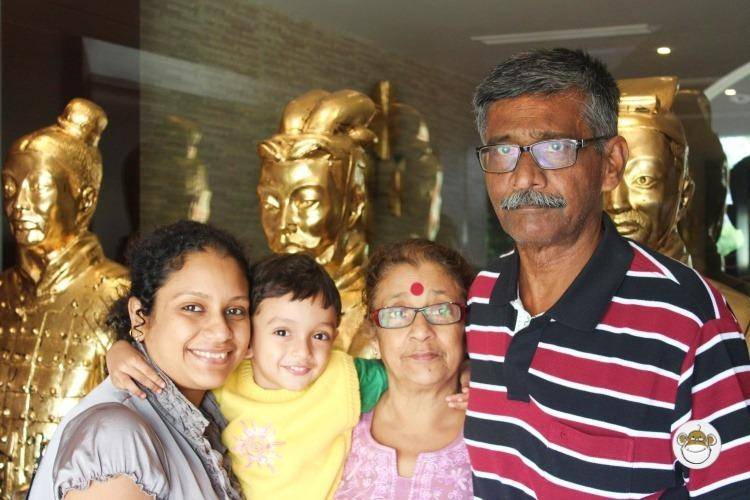 The next few days are a blur to me – if I could choose, I would have wiped it all out from my memory. As for Baba, in his wobbly state, he took Maa’s humongous bindi and pasted it on the leather strap of his watch. This was one of the many ‘mementoes’ he hung on to, including her slippers.

One look at her photo and there were sudden outbursts: “But you told me you’ll take care of me always. Who will do that now?”

In the midst of such mental turmoil, I don’t know why I broached a very delicate topic once again – a visit to a neurosurgeon, as he was clinically deteriorating. I expected extreme opposition from Baba.

The routine visits and tests followed and soon after, the surgeon spoke to Baba. It helped that he had been recommended by one of Maa’s students. He began the conversation with Baba’s favourite topic – football. Our man sat up immediately. With few immediate memories, he clearly had distinct memories from long back. The discussion drifted across various topics, and soon it was time to go home. While I knew the surgery was a must, I kept practicing lines in my head. “Baba, korbe toh (Baba, will you)?” is all I eventually managed. I saw him staring at his watch, not the dial but the strap, which flaunted Maa’s big, red bindi. “Haan, Maa r jonye korbo (yes, will do it for Maa),” he stated. All these years, so many doctors, no amount of convincing could do what one circumstance did. She had to go, for him to say yes.

Today, he’s as good as he was a little more than a decade ago. After years, when I saw him walk into the airport, carrying his bags, board a flight to Kolkata and take a cab back home, an overwhelming feeling gripped me and I wanted an answer – Why did she have to go for him to say yes?