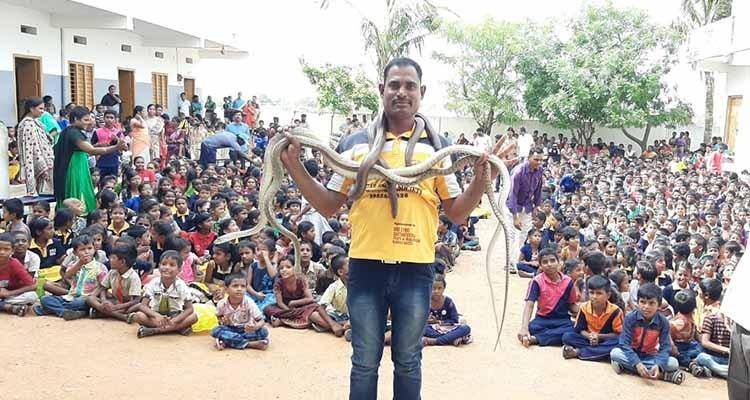 Cheerla Krishna Sagar is a snake rescuer who has rescued 1350 snakes till date and after he started the Sagar Snake Society in 2017, he and his society volunteers, get at least 30-40 calls in a day for snake rescue. He is by profession a Home Guard at Wanaparthy Town Police Station in Telengana but rescuing snakes and making people aware of the importance of snakes in the ecosystem, is his life’s mission. It all started when he was bitten by a snake and he killed it immediately, only to know later it was not venomous. That’s when he started researching on YouTube and Discovery Channel and realised how little we know about snakes. On World Snake Day today, July 16, 2019, he debunks a few myths about snakes.

Is it true that snakes are in pairs? 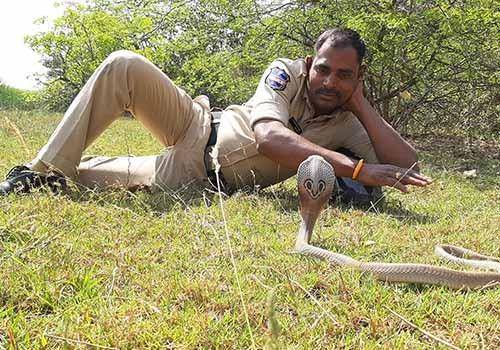 Typical flirting then ensues once he locks eyes with the female snake. He will court the female by bumping his chin on the back of her head and crawling over her.

The mating begins as the male wraps his tail around hers to meet at the cloaca, which is the exit point for waste and is also used for reproduction.

A female snake mates with a number of male snakes. And same goes for the male. So there is nothing like they are always in pairs.

If one snake is injured or dead/killed do other snakes mourn or take revenge?

No, the snake’s brain is too small to remember. The snake leaves some kind of smell when it is going to die. So, the other snakes come to the place. They don’t take revenge. And there is nothing like a male or female mate will come in case of a death.

Have you seen snakes in pairs? What has been your experience like?

Yes, I regularly see snakes in pairs. I leave the place as I believe they should be given the privacy they deserve.

What is this concept of Icchadhari Nagin (a snake who can change shapes) so popular in Hindi cinema?

Movies are fictional, there is no such concept.

Do snakes have families or relationships?

Well they have a family, but they don’t maintain relationships as they live separately once they come out from the eggs.

You have rescued so many snakes will they remember you for being their saviour? 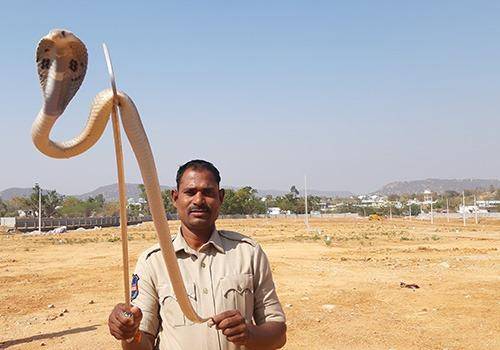 Actually it happened to me once. Each human being has separate jaw movement. The snakes have special talent to discover the person by jaw movement. I rescued a rat snake which was injured. I took the snake to the hospital, got it treated and left it in the forest.

After 4 months when I went to the forest to leave some other snakes, this snake came near me. As I said snakes have small brains and do not have great memories but it is also true animals have a sense of gratitude.

Body Dysmorphic Disorder: How her Relationships Suffered because of BDD

What does it mean if your guy has no female friends?