Here is a true story that is as cute as a button, pretty much like this young married couple.

Marianna and Anthony met in college nearly seven years ago. They were firm friends from the very beginning. Anthony was smitten with this bubbly girl and made every effort to win her over, in the simplest of ways. He would keep a seat for her on the bus, walked her home from college, and did all that he could to woo this young lady. She wasn’t aware, of his feelings but she developed a fondness for this young and happy-go-lucky boy. During classes, he made it a point to sit near her and actually annoyed her a bit, which was the beginning of young love.

Marianna puts it in like this and I quote “There was no defining moment that made me realize”. She was moved by his honesty, integrity, and cuteness. At the annual Christmas dance, he plucked up the courage and asked her out and that was the defining moment for her. He was quite the romantic and wrote poetry for her (which was actually coined by his sister)! That was it; she was smitten and knew that he was THE one for her. They told their respective families. Everyone was on board.

As luck would have it, they ended up working in the same firm and were sent abroad for a project and their love blossomed even more. When they returned to India, he put his plan into motion. On a trip to the Andaman Islands, Anthony, the romantic, got down on one knee and proposed to his ladylove. The pièce de résistance was when he subtly asked someone to take a picture of them, gets her to pose and pops the question. He got the answer he wanted – she accepted! The families made it official with a limited crowd of close relatives and friends at the engagement. Both of them wanted a year to plan the wedding. The festivities began with parties galore and the traditional fare by the bride’s side with the Haldi ceremony. Not wanting to omit the fun times with friends the two of them had their respective bachelor and hen parties with the usual naughty fare.

The song of ‘Is this the little girl I carried’ rings deep in the mind of the elders who couldn’t believe that their little Marianna was now a bride. The day was a dream, she looked radiant and beautiful. Anthony was nifty and his curly locks made him glow even more! They made it happen. The reason why it works for them is commitment, love, acceptance, understanding and huge doses of conversations! Let’s not forget that sex is also a constant. 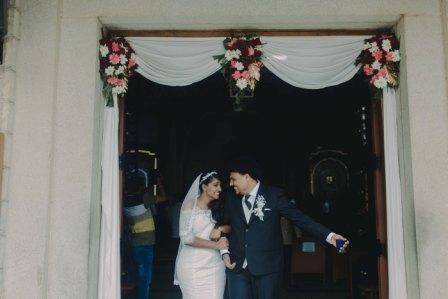 This true story lets on that there is hope for everyone. It also lets on that a college romance can culminate in marriage.

I live in Bangalore and work as a Freelance Writer and Occasional Blogger. Having had over 10 years of experience in recruitment, I shifted base to writing. The genre of work that I concentrate on is self-improvement and motivation. My love for the written word takes me blogging and writing content (as a ghost writer). You can say I am a simple soul with some amount of drama to keep me going. I live life a day at a time.  Head across to my generic blog at https://theotherpersonality.blogspot.in/