(As told to Ranjana Kamo)

We had the picture perfect marriage

Ajit and I tied the knot in the summer of 1980. We had a happy life with everything going well for us. Ajit was running a business while I was managing the house. We had a comfortable life with the decent earnings that Ajit managed from his business. Our happy world soon consisted of a daughter and two sons. Ajit made it a point to take us out for movies and picnics on every weekend. He got along well with my parents and we visited them often. My in-laws lived close by and we used to meet them thrice a week at least. I felt like the luckiest person in the world. A loving husband and three beautiful children – what else could I have wished for!

It was seven years later that destiny decided to rock the smooth sailing ship of our lives.

Related reading: I thought she had a perfect life till she broke down and told me her story

He locked himself in his room

One day Ajit returned home early and locked himself in his room. I was perplexed and shocked by his behaviour. I kept knocking at the door but Ajit would not open it. My children flocked around me as they sensed the tension in my voice. I ran out of the house for help. The neighbours were not home so I called my in-laws. I wished it all to be a nightmare but it was for real. They came running and talked him into opening the door after great persuasion. But Ajit was not willing to talk to anyone. I could not believe what I was witnessing at that moment. Ajit was a changed person and this change in him was brought about in a couple of hours, which left me devastated. 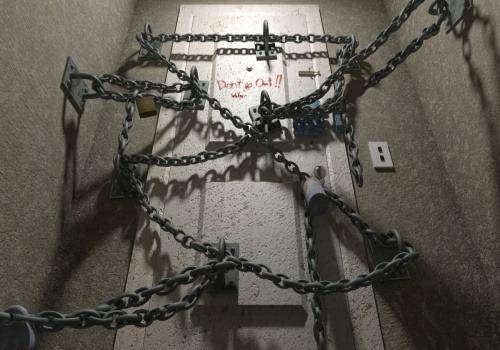 Ajit told us that nothing was wrong with him. He was unwilling to disclose anything to me or to his parents. We were all shocked by his behaviour. My in-laws suspected foul play at work and the neighbours suspected something ‘paranormal’. I was clueless as to what was happening to my world. People suggested that we take the help of a psychiatrist and some even said we should get help from some tantrik or sadhu baba. We tried to take help but all in vain. Ajit would not talk to anybody. My home that was always filled with his laughter was screaming with the sharpness of his silence. I could feel life slipping away from me. Our children were too young to understand much but they could sense the uneasiness of the house, and that made them comply with everything that I asked them to do. My daughter, who is the eldest, would sit with me when I cried and clasp my hand in an effort to pacify me.

Ajit stopped going to work. He would sit in a corner of the house all day long and spend his time looking out of the window. Whenever I asked him anything, he would either nod his head or respond with a quotation from one of the saints. I would question him if he had any problem with his business but he would just avoid my question. The sudden change in his behaviour remains a mystery for us till date. It was some months later that I realised that we were running low on our finances. My mother and my father-in-law asked me if I would like to work and that set me thinking. I’m just a graduate and all I could think of was teaching young children. I had to manage the house and my three children, so the best option for me was to take tuitions at home.

It was not easy for me to convince my neighbours to send them to my home school, but I was not willing to lose hope, as I did not have any other choice. I again spoke to my neighbours and friends and soon got my first student, a four-year-old boy who had to take admission into nursery. The boy’s grandfather had decided to send him to me just out of courtesy. I knew this was my chance to prove my ability and I was determined to make it work. I started teaching him alphabets, colours, poems and all that I could think of. The boy picked up and his parents were happy with his performance. He became my lucky mascot. His behaviour impressed others and I got two more children for my school in a couple of months and my business picked up. My own children would join my class and listen to me as I taught my students, who gradually grew further in number. Ajit was still his non-communicative self, but would smile at me whenever I passed by him. I would get hopeful seeing him smile, but his attitude was not as sensitive as it used to be. My son fell ill and had to be hospitalised. My father-in-law and I kept running to the hospital and I had to shut the school for three days, but Ajit did not react at all. When I informed him about our son, he looked at me with an empty gaze and recited a quote that had no relevance to the situation at hand. His odd behaviour would leave me frustrated, but then he would smile at times, making me forgive his cold attitude.

Why do you stay with him?

It was very difficult for me. My friends and neighbours questioned why I was staying with a person who had decided to live the life of a recluse. I always had the same response for them: “He gave me seven years of happiness and three loving children. There must have been something very critical that changed him drastically. I don’t mind managing the house as long as he is around. It’s not in our culture to walk away from a relationship. Would he have dumped me if I had gone through a similar life changing experience? I don’t think so. I want to be there with him through every phase of life. You never know, the way he changed mysteriously all of a sudden, one day he might just change, in an instant, for the better again. We have had a very beautiful and loving relationship and I cannot give it up when my husband needs me the most. This is an illness and I have to be there for him, both in his good and bad times alike.” I was hopeful, but my hopes did not see much light. My children joined me in my home-based tuition business as soon as they reached middle school. They were managing their own studies and also helping me out diligently. Life had taught them much more than what I could have. They turned out to be very responsible children who knew that their mother needed their help. They would return from their school, complete their homework and come straight to help me at the terrace where my home school ran.

Related reading: 7 people share the worst things their marriages have ever survived

The four of us were putting in our two hundred per cent to the classes and this resulted in a huge number of students joining our home school. The number grew so high that we had to start three shifts in the day to accommodate all the students. We worked from 6 a.m. to 8 p.m. daily. I would take the first shift while my children were in their school and then they would help me in the next two shifts after they returned from their school.

Over the years, Ajit has started talking to me, but it is limited to his asking me if I need tea. He makes tea for me in the evening and at times he tells me to rest while he makes dinner for us. This makes me happy to see his concern and care for me. The children are grown up now. My daughter is married and settled abroad. My elder son is working with an advertisement firm and my younger son is helping me in my school. I have hired two teachers who manage the shifts.

I have won a reputation for my school in and around my neighbourhood. Ajit is still in his own world of quotations and prayers with intermittent concern for me when he cooks dinner or makes tea for me. I am still hopeful that one day Ajit will recover from his state and be his normal old self again.

My husband is jealous of my success

It is heart touching. I appreciate the selfless love of women towards her husband and the way women & kids fought with life. Hope by this time, her husband would have recovered completely from illness. God forbid, if not, if they believe in spirituality, Lord Dattatreya incarnation , Sri Guru exists in Ganagapur who is known to cure such illnesses of devotees who have faith in Him. So if they believe, can try it out. May God bless him complete health and prosperity.

It is heart touching. Kudos to your braveness , love towards your husband and your loyalty. In today’s age, in spite of having good husbands, there are many wives who cheat their husbands with either with one night stands or affairs where as you have stood with him like rock solid. In fact I am getting tears while reading this. I am sure even God must be pleased with you. I am sure your husband returns to his normal one day soon. All our prayers with you. Pl.keep posting.

RA, appreciate your feedback. I will pass on your wishes to my friend whose story I have narrated here. Thank you so much for taking the time to go through it and share your feedback.

Hi
Pl.take some spiritual help . When all means fails, we need to fall back to God as we are all his children. Also astrology also some times help. As one of responses says, advanced medical technology also to be considered. In my view , we must work on multiple fronts with hope and she must continue to keep hope which she maintained so far. Thanks