Catcalling, wolf-whistling, ever wonder why these words have animal prefixes? These are the names given to the street harassment that thousands or maybe lakhs of women and girls face every day when they walk out of their homes. These are kinds of sexual assaults done by dangerous animals out on the streets disguised as humans. The type can range from eve-teasers to molesters to abusers, and the magnitude can range from calling ‘chashmish’ or whistling or smooching sound, to groping, molestation and in extreme cases, rape too.

Catcalls, as defined by the Urban Dictionary, are a whistle or yell for the purpose of getting attention and with the hope of a future hook-up. But most of the abusers forget that 99.9% such advances never result in any hook-up. Most women in our country must have faced some sort of this type of sexual harassment during their lives and many might be still fighting it while we are reading this.

Most women in our country must have faced some sort of this type of sexual harassment during their lives and many might be still fighting it while we are reading this.

It is not limited to any age, background, or gender (read LGBT), and definitely not looks. It’s all in the mind of these misogynists who have a delusion that it’s some kind of compliment or their right to speak their mind. But when faced with rejection, they can go to extremes like throwing acid, which burns not just the skin but deeper into the soul, too.

A 12-year-old girl was going with her grandmother to buy a new dress for her birthday. As they stepped out of an auto-rickshaw and walk towards the door of the shop, she heard a guy sitting on a bike parked few meters away whistling and smiling at her. She looked perplexed at Granny and asked “Do we know him, dadi? Why is he smiling?” This was her first encounter with the world of hoodlums waiting for opportunities. Granny held her hand tighter and said “Just don’t look at him, and ignore such sounds in future.” 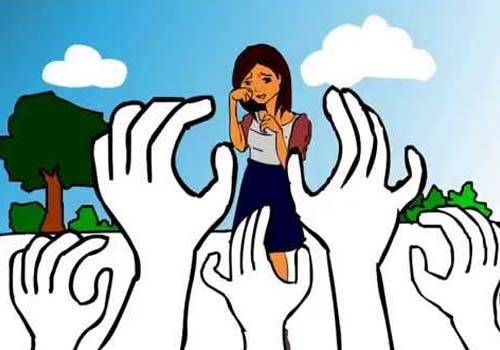 Working in a corporate world was her dream, but it came hard. Twenty-six-year-old Sarah completed her business school and was ready to make her presence felt. She did make it, but not without feeling the presence of constant unsolicited remarks. These remarks could be for her dress (with glances that scanned her body right underneath the clothes) by male colleagues, and jealous looks with gossip and taunts doubting her efficiency and convinced of unreasonable favours behind her achievements, by female co-workers. This situation is not limited to just corporates, it can be any field involving human sapiens who have not been able to resolve their conflicts with self and look for a source outside to project their deficiencies. These may sound like innocuous incidents, but nevertheless are not trivial enough to be ignored.

Related reading: Men get sexually harassed too! Here’s how to identify it…

Those who have confronted this in severe form have been through worse, being called sl*t/wh**e, with comments on anatomy, stalking, and also being victims of crimes like rape or acid attack. The tragedy of this crime is that it rarely evokes response or retaliation from onlookers. There are countless accounts of such street harassment, but even police would turn a blind eye to it until it converts into a sexual assault. The majority of women express concern over how catcalling escalates into assaults that can be sinister in nature, but then there are some who are happy to accept it as an inevitable part of life. There are zillion articles, stories, interviews to give statistics that proclaim that India is not a safe country for women. But why?

Tough laws hardly work as a magic wand to tackle such crimes. Instead, there should be high conviction rates that can create a threat of punishment and persecution in the mind of such people. The punishment should be calibrated to the degree of crime committed. There are certain reforms done from 2013 to 2016 after the Nirbhaya case in Indian Penal Codes. Being aware about these can help a victim while filing an FIR:

A man committing any physical contact, advances involving unwelcome and explicit sexual overtures; demanding or requesting sexual favours; or showing pornography against the will of a woman; or making sexually coloured remarks, shall be guilty of the offence of sexual harassment. This can lead to rigorous punishment extended up to 3 years.

Obscene acts in any public place, singing obscene songs to the annoyance of other. This can lead to imprisonment up to 3 months or a fine, or both.

Uttering any word or making any gesture intended to insult the modesty of a woman. This can lead to imprisonment for 1 year or a fine or both.

Let’s not be bystanders to such incidents. Till the law takes its course, we can make an effort to put an end to such bedevilment by creating a continuum of intervention. It can be in any form (verbal/non-verbal), any mode (from calling the police/security to just standing between the perpetrator and victim) and can involve all individuals. Every situation has a point where one can intervene and put a stop to this assault. Asking the victim “Are you OK?” “Do you need my help?” will give her power to stand up and not feel alone. Rally other bystanders to join you in voicing disapproval. Create a culture which doesn’t sit idly in silence condoning violence against women; instead help to empower them actively to prevent such crime.

Nice article. thanks for capturing the spectrum of the topic. As a nation we need behavioural change in the value system of how males are raised in our country. Keep writing and make us more aware.