There are many perks to being married to a much younger man. Life is never dull and the virtual world is just a mouse-click away.

Unfortunately, that makes me a video game widow.

What it means to be a gaming widow

I have spent innumerable nights while he games and games. And games. Well into the dawn.

If it were outdoor sports, he would eventually tire or it would just get dark.

I have watched dinners grow cold, date nights fizzle and plans slide into oblivion. I have languished in anguish, the forgotten wife, while I wait ‘ ten minutes more’ for yet another game to finish.

First there was War Craft for multiple players. Each weekend was a gaming marathon, with the entire team over all day and night. At least we always had the best Internet connection.

Then came Counter Strike, a bloody game of shoot to kill. Soon our little girl knew all the guns in the armoury, watching the screen in rapt horror as blood spattered across it after a kill. Guns fired well into the night as my brain circuits fired up with them, and I became the Enemy.

HALO made a brief appearance and I doggedly tried to join him gaming since I couldn’t beat it out of him. I never got the hang of it.

Things got worse with DOTA.

When they team up worldwide

Now this was a whole new league. Online gaming, multiple players and entirely virtual. All the previous obstacles vanished: time, space and geography didn’t matter anymore. DOTA is the Big One. There are documentaries about DOTA, about the international world championships, what a huge phenomenon this is (Yes, I had to sit and watch, he was so keen for me to share his joy). We even had a serious chat about his quitting work to game fulltime and win the big prize money. This idea was mooted, as the average player is 17 years old with mightier reflexes. Despite being beaten regularly, my husband and his team Never Ever Give Up.

The tactics I tried

I earned a reputation for being the Scary Wife. I either yelled at them all over the open mic or I went into cold sulks. Neither helped. 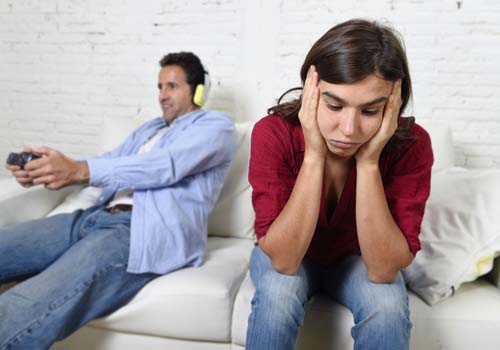 The sulks meant he just gamed more. The yelling made them all laugh harder, until one by one, they all got married. Then the joke was on them. One guy now games with his baby on his lap.

Did I mention the special gaming laptops, the fancy gaming mouse, the complete ban from using the net while a game was on? Let me mourn all the attempts to entice and seduce my Man away from the far more alluring world of DOTA. Lace didn’t work, nangey naach didn’t work. Elaborate plans, even having the in-laws over couldn’t dent his single-minded focus.

I think this gaming addiction may be genetic. It’s not just him but all four of his brothers, their many cousins and their closest friends.

I have my own code name.

He uses it to warn them I am on the prowl and that his time is running out. I’m honoured.

I have tried bribing the team. When that didn’t work, I tried threats and intimidation. But I am no match for these virtual Warriors of Legend. I am just the pale wife of the Shadow Shaman.

I even have a DOTA widows group of all their WAGS. We have been planning a simultaneous attack on our men: shock, awe and destroy.

The machinery is now an heirloom

Our PS3 commands the hall, is dusted daily and much coveted by nephews who visit. He must pass on the baton to the next generation, it is his Sacred Duty. No surprise that the bachchas are all born gamers too.

I wonder when he will notice the diminishing level of his booze cupboard as I seek solace in high spirits. I don’t think any husband has ever been so enthused about sending his wife on vacation so he can stay home and game uninterrupted!

Ironically, both my trips away, his plans fell apart as he ended up in hospital. Divine justice??

I have tried banning gaming at home entirely. And I am always suspicious when he docilely falls into my plans to go out. Unfortunately, I have caught him sneaking out at 3 am to game at the dining table. Online gaming is endless and there is always another lonely soul to connect with and battle.

I have a secret fantasy…

My secret fantasy is beating them all at their own game!! Apparently, women play DOTA too and have been beating my Man soundly. If only I didn’t prefer a good book instead!

I continue to languish and seek comfort from the fact that I am not alone. The night is dark and full of gamers….

Our choices didn’t match, but our hearts did!