What are traditional gender roles? What is the ideal man like? Is he tall, strong, stoic? What about the ideal woman? Is she petite and soft spoken? Is she nurturing? When I asked you this question, a similar answer may have entered your mind.

Now you might like to believe that gender roles were never really required and it was solely created as a patriarchal tool to oppress and control the way a person thinks, acts and feels. While the state of modern society might make you like this idea, it couldn’t be further from the truth.

An important thing to remember that traditional gender roles were not brought into existence a few hundred years ago. Gender roles are as old as civilization itself. Gender roles were vital to human survival back then. As far back as the stone-age, yes that stone-age, where the latest technology consisted of things like sharp stones and bowls.

Getting a meal for your family was not a thirty minute trip to the nearby store, it was a three day hike in the forest and you could still come back empty handed. Life back then was not as easy as it is today. And so gender roles were born. Men and women both recognized their strengths and weaknesses to help each other survive. Each gender role was just as important as the next.

So at that point gender roles were not meant to create gender equality but were meant to uphold gender norms examples.

Related Reading: I am now the stay-at-home dad and my wife the breadwinner; and we are making it work

Traditional gender roles were important for staying alive. We recognized that differences between men and women and women did exist, both biological and psychological.

We used these differences so that the strengths of both genders would make up for the others weaknesses. However, somewhere along the way, gender roles went from being a tool of cooperation for mutual benefit, to a tool used to control and belittle.

Logically speaking, I have no idea why gender roles were not left in the past. The truth is gender roles are not vital to survival anymore. Not since the Industrial Revolution and the development of medicine. Technology has rendered most gender roles redundant.

Today men and women can both live individual lives, they can work, study, explore and thrive without really needing anyone else.

Due to how useless gender roles are in today’s age, there really isn’t a reason we should still believe in them dogmatically. Now the focus is on promoting gender equality rather than harping on gender roles in society.

While it is true that fewer people are adhering to traditional gender roles today than they did before, gender roles still exist in almost every aspect of society. Gender roles and stereotypes may be subtle, but they are still quite prevalent, impacting how people interact with one another at their places of work, their homes etc. Types of gender roles include male gender roles and female gender roles that are followed when it comes to child rearing and household chores.

It infringes upon a persons individuality, it oppresses people and forces them to act, think and feel in a certain way. The problem arises when someone doesn’t fit into their gender role. Not only does the person feel like they don’t belong and something is wrong with them, they are also often subjects of ridicule.

1. Cooking – Most common example of a gender role

From a young age, girls are taught that it is their responsibility to learn how to cook for their future families.

A woman who cannot cook will find that a part of society is quickly going to look down at her. As you might have guessed, this isn’t a role that is traditionally pushed upon men.

Personally, everyone should learn how to cook as neither feminism nor sexism will feed you when you’re hungry. This is one of the gender roles that served a purpose back when technology wasn’t as sophisticated, it is a pretty outdated traditional gender role to still believe in.

We all know that traditional gender roles dictate that a man should be the one working while the woman stays home. This is one of the most important male gender roles. You also probably know that this mindset is slowly disappearing as more and more women choose to prioritize their careers.

What you probably don’t know is that gender stereotypes also affect what profession someone can join with ease.

When it comes to traditional gender roles affecting professional lives, it was found that women tend to get jobs easier in the nursing or hospitality industry because of their perceived sensitivity.

On the other hand, it is far easier for men to start their careers in the field of IT or technology because of their perceived analytical skills. This is just one tiny example of how traditional gender roles still impact a person’s daily life.

Nursing and caretaking is another “responsibility” that is placed upon women. This entails seeing to the non-financial needs of the household, like cleaning, babysitting etc. While the importance of nursing in a household cannot be underestimated, placing the entire burden on women is extremely unfair.

Women are expected to consider the needs and desires of others before they can think about themselves. This is an example of one of the more harmful gender roles. This traditional gender role actively oppresses women and teaches them that their needs will always be second.

This gender role actually normalises sacrificing in a relationship putting the onus entirely on the woman. But if we are talking about promoting gender equality then care taking is as much a responsibility of a man as it is of a woman.

Related Reading: I put my career on hold to travel for my partner’s job

If we look at 10 examples of traditional gender roles then we will see how ingrained dressing is in the human psyche. There is no denying the fact that women have taken to wearing trousers these days but men haven’t taken to skirts yet. So gender norms still exist, isn’t it?

What it does do, is create dissent amongst people. It makes one group of people judge the other which leads to increased hostility. This traditional gender role slowly creates barriers between people.

Gender roles are instilled at a very young age. Even children have gender roles forced upon them. Boys are expected to play sports and do well in school. If either of these criteria aren’t met, that little child will be a target for bullying.

On the other hand, little girls are expected to stay indoors and partake in the household activities such as cooking and cleaning.

While this is just one example of traditional gender roles that is enforced on children, it instills the idea of segregation at a very young age and forces children into a particular lifestyle.

That’s why even today adverts for dolls and dolls houses or cooking play sets are still targeted at little girls and boys are asked to buy the shields, guns and those action figures. 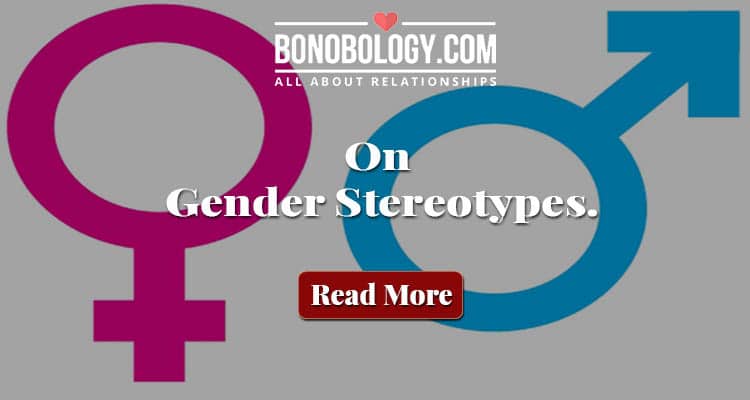 The ability to perceive and show emotion is generally associated with women, while men are supposed to be stoic. This one is detrimental to both genders.

On one hand, since women are expected to be more sensitive and emotional, their opinions or concerns are not taken seriously. Her views are dismissed and if she gets angry, she is said to be overreacting.

On the other hand, men are expected to not show emotion. This means that if a man does show an emotion like sadness, he is presumed to be weak. This particular role causes both the genders to have to hide their emotions to avoid being ridiculed. But experts say it is okay for men to cry.

7. Aggression – Men can be angry, women are docile

This is another example of a traditional gender role that causes a lot of harm in society. Men are expected to behave aggressively, anger and acts of violence tend to be overlooked because of this. This excuses violent behavior and sometimes even encourages it. Most men who firmly believe in this principle tend to be violent and abusive and they never truly grow out of it.

On the other hand, women are expected to be soft spoken and subservient. Any display of anger is either attributed to her periods or neuroticism. This particular gender role invalidates emotion and creates a violent atmosphere.

Related Reading: 15 Ways A Woman Wants To Be Treated

The world of dating is filled with traditional gender roles. We have all heard the common ones, a man should pay for the date, a woman should never initiate a conversation. Whats truly devastating though are its implication.
There are so many traditional gender roles when it comes to dating, that it actually gets quite difficult to find a partner. No one is really sure of the dating protocol anymore. These gender roles only serve to make dating harder than it already is.

9. Marriage – Man is the provider and protector

The wife needs to take care of the domestic part of the household. It is her job to make sure that there is food on the table and that the house is clean.

Both those roles are very important, but marriage is a partnership, both partners need to bear responsibility. Trying to follow tradition gender roles in today’s society leads to unhappy and problematic marriage.

Related Reading: Paying For The Wedding -What’s The Norm?

Let’s talk about being pretty. What does pretty mean. If you believe in traditional gender roles, a pretty woman is someone who is petite, has a sharp face or various other attractive physical features. For men it is someone who is tall, muscular and probably has a few scars. This is probably the most discussed traditional gender role in today’s society.

This is an example of a traditional gender role that causes various mental problems from anxiety to body dysmorphia. When it comes to harmful gender roles, it is difficult to find something more damaging than this. This gender role increases the likelihood of people feeling inferior and insecure.

1. What are traditional gender roles?

2. What are gender roles and stereotypes?

3. What are gender norms examples?

Gender norms examples are women are to do the cooking at home, they are to do all caregiving work and girls are supposed to play with dolls. While boys play with guns and men go out to work and provide and protect the family.

4. How have gender roles changed over time?

Traditional gender roles still exists but now the focus is on gender equality. That is while women are going out and having thriving careers, men are good at household work and looking after children. The thin line that separated the gender roles is gradually getting erased over time.

8 Relationship Problems You Can Face If You Had Toxic Parents