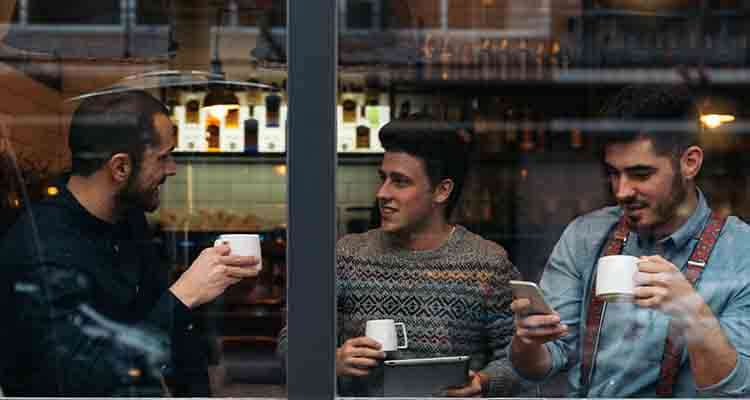 When your friend is heartbroken you need to be with them to assure them that no matter what, your shoulder is there to cry on. One of the hardest things in the world that you will have to ever do is being there for your friend after a break-up and not being able to beat their ex to a pulp for having the nerve to hurt your friend.

If you have already been at that maddeningly violence-inducing situation, you know how it feels when you don’t know how to console a friend after a break-up. If you have not, which I hope is true, know that nothing will hurt your stupid heart more than seeing your best friend crumble over a stupid jerk and then having to pick up the pieces. The experience will teach you some extraordinary stuff about life, like five different ways to kill a person while cradling the person that they hurt in your lap and stuffing chocolates into their face. It will also probably burn a serious hole into your pocket because chocolates can be expensive and no one can consume more buckets worth of that stuff than your depressed friend.

In fact, when my bestie had a break-up apart from chocolates, I also had to get the packets of cigarette, the occasional momos she craved for, the bottle of wine that kept us sane and then we would together pass off on our couch. In the morning while I headed for work she could still be there crying and then I would keep wondering how to console a friend after a break-up because nothing seemed to be working. It’s been years after that and we can now look back and laugh about those days but at that moment helping a friend through the break-up wasn’t easy. But I gradually figured out how to do it and here are 10 ways to do that.

So, in case your friend recently had a breakup and you have no idea how to handle the aftermath, here are a few things you can do to make the situation a little bit better.

1. Turn them into an eggroll

No, don’t put them in a pan and fry them. It’s a metaphor, silly. Or not. The idea is to put your weepy friend in a bed-sheet and fold the bed-sheet around them. The bed-sheet is the bread-sheet and they are the egg filling. Get it?
Bonus: Their tears can be the ketchup. Hint: Don’t eat them. Jokes apart if you can really do this and keep them wrapped up for a while they would realise what they are doing to themselves by shedding tears all the time. It would be a bit of a rude, rolly-wolly awakening but an awakening nevertheless.

Read more: How my heartbreak changed me as a person

2. Throw food at them

What do you say to someone who is heartbroken? Don’t say, just throw. Yes, we are serious. You will soon learn how fast a person’s reflexes can get when they see a plate of biryani flying towards their face. No one wastes a good plate of biryani. Or a bucket of chocolate ice-cream. Try this especially when they do not seem to be reacting to anything you say or do. Everyone reacts to biryani. If they don’t, why are you even friends again? Throw food at them

Read more: 15 tips on how to not get friendzoned

3. Make plans to kill their ex together

There is hardly anything that deepens friendship more than shared hatred and promise of violence to come. So, in your friend’s rare moments of anger when they would rather scream than cry, plot their ex’s gruesome untimely death to the smallest detail. The more vivid the details, the better. This has the added bonus of you getting to impersonate your favourite villain and do their evil laugh. It also saves money on ice-cream and tissues.

If you are still thinking of how to console a friend who is going through a breakup, cursing the villain together could just be a great beginning.

Believe me, you will need them. Keep an endless supply of tissues around as your friend will need them when they cry and then when they will catch a cold because of all that crying. Basically buy an entire shelf of tissues from the shop. And then add a few tubs of ice-cream to the collection while you are at it. 5. Smack some sense into them

If it has been weeks and still your stupid friend still cannot see how much of a jerk their ex is and a flood is threatening to drown the house, smack them till they see light again. Or smack them unconscious. Whichever is more effective!

Hint: Probably not advisable if your friend is stronger than you. In case it’s unavoidable, do not forget to pack Volini. You will thank me later.

6. Tell them you are an alien and think humanity sucks

How to cheer someone up about their breakup through text? Send them the funniest break-up memes and jokes and lighten up the mood. Or better still make a meme yourself and send it to them. For better effect, tell them you are an alien you will blow this planet up and ask them to come with you. They will be too busy worrying about your sanity to pay attention to their recent break-up.

Yes, you have heard it all before. No, you cannot avoid it. By now you have probably mastered the art of sleeping with your eyes open so put it to some good use. But if you want to console your friend after a break-up you have no way out. You HAVE to listen. Related Reading: 5 Steps To Ensure Closure After A Break-up

8. Tell them it’s not okay to use wine as an excuse to call their ex

Some very good grapes died to make that wine. They deserve more respect than being used as an excuse to call her ex. Drunk texting an ex is what we all do but tell your pal if he or she does not want to look like a clingy thingy sticking on to the past, it’s best not to use wine as a pretext to text.

They will probably cry again but puppy tears are tears of happiness so it’s all good. A pup can take away the attention from the ex, trust us. It’s got great healing powers as well.

Your friend will get so busy with the pup that he or she won’t eventually have the time to think of the ex. Whew! Good for you.

Yes, even if they are not a woman. Make them watch Queen, which is the epitome of break-up movies and tells every stupid ex to go to hell. Watch your friend realise this and see how their life changes afterwards. If the effect starts to fade after a few minutes, make them watch it all over again. There is no such thing as watching Queen too many times. Every time your friend watches it you have consoled them after the break-up. It’s good on your conscience. 11. Always make sure to refill their glasses

Make sure you are not planting the seeds of alcoholism while you are at it, though. Refill their glasses and take away their phone. Then dance madly around the house till you both pass out. You can make use of some chilled out Bollywood break-up songs to add that tang to your dance routine.

12. Remind them that their ex looks like a boiled carrot

Bad attempts at worse jokes aside, there are not many things you can do when someone else is dealing with this kind of a mess. The best you can do is being by their side constantly and reminding them that yes, they are a good person and yes, they will probably find love again but no, they should never ever consider calling their ex-lover. And that when they do get through this, you will be there waiting for them on the other side with wine and chocolates.

Sleeping with your best friend? Here are 10 pros and cons

How To Call Off An Engagement? Relationship Expert Suggests 10 Ways

HEHEHE and you know what I just loved the article may be the thing that it is the most amazing I have read today on the Internet. In love with it. WOW. it is superrrr

The above pointers are really nice to follow to make your friend feel better!