12 Signs Of A Lying Spouse 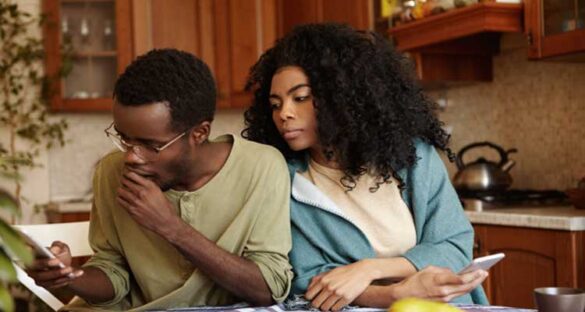 It can be heartbreaking to be lied to by someone who you value in your life, for example, your spouse. This is because you trust and believe in them. So the idea of them lying to you can be hurtful and might make you feel betrayed. Even so, it’s important to spot the signs of a lying spouse if you suspect there is dishonesty in your relationship.

However, the intentions behind lies matter too. If your spouse lies to you to save you from a certain situation, or lying is a one-off case, then you can choose to let it go. But, if you think your spouse is deliberately keeping things from you and lies all the time, then it can be a matter of grave concern. You find that your partner even lies about small things.

So, how should you deal with your lying spouse? Let us explore this further by delving into the possible reasons why they feel the need to lie.

Why Do Spouses Lie?

Sometimes, spouses lie to save themselves from embarrassment while other times they may lie to protect their partners from grief. But, at the end of the day, lies still remain what they are – lies. Hence, it is important to know about some of the reasons or circumstances which encourage them to lie to their partners. This will help us in dealing with a lying spouse.

When you discover that your spouse has been dishonest with you, you may wonder why does he lie to me if he loves me. Or why is she not honest with me even though she claims that the relationship means the world to her. If your husband or wife is lying, these could be the reasons behind it:

12 Signs Of A Spouse Who Is Lying

Lying is, first and foremost, a destroyer of trust. Once trust issues take hold, a relationship cannot survive the struggles of life. Lying in marriage, or in a relationship, can complicate matters, create issues that might blow out of proportion. This may have serious implications for your relationship.

As they say, the truth always comes out. Hence, there are ways in which you can identify the signs of a lying spouse. This article will help you get acquainted with these signs and teach you how to deal with a lying partner. Look out for the following signs as they will help you in identifying and confronting a lying spouse. This might just be the key to saving your relationship:

Related Reading: How To Watch Out For The Relationship Red Flags – Expert Tells You

1. Your spouse speaks in an unusual way

As a person who communicates with their spouse on a daily basis, you know their general manner of talking. Therefore, you will notice if your spouse is speaking in a weird way. If you find them talking quite differently than normal, then this can be a sign of him/her lying to you.

Why? Because people who lie usually change the tone of their voice, their pitch and speed of their speech to assert their lie as the truth. If you notice that your spouse tends to talk a lot faster than usual in certain situations, it could be because on some level they’re uncomfortable about being untruthful.

Even though it may seem like a small aberration, it be could one of the most telling signs of dishonesty in a relationship.

2. Eye movements can be a good indicator

Does your spouse avoid making eye contact with you while talking to you about specific topics? If yes, then it is possible that they are hiding something from you. He/she might even start blinking frequently when you try to talk about something that they are trying to hide.

If you want to be sure whether your husband or wife is lying, pay attention to their facial expressions and mannerisms. You may be able to catch them in a lie. Perhaps even nip this tendency in the bud well before it blows out of proportion, leaving you wondering when to leave a lying spouse.

3. Your spouse scratches and fidgets excessively

If you find your spouse scratching continuously or uselessly fidgeting during a conversation, then it can indicate that your spouse is lying to you. Scratching and fidgeting are actually signs of heightened anxiety and nervousness that people experience when they lie to someone.

Mia was able to identify this as one of the signs of a lying husband because she noticed how his hand movements changed whenever she asked him about his whereabouts. On this mere hunch, she started to dig deep and discovered he had been lying about cheating all along.

Those who lie usually position themselves in such a way that they can avoid scrutiny. When your spouse lies to you, the following might happen. Your spouse may turn their body away from you, get up and feel agitated while talking to you. They may even start perspiring.

These body language signs of a lying spouse are not in any way related to the magnitude of the lie. If you can’t shake off the feeling ‘husband lies to me about little things’, start being more analytical of his body language and you may be able to tell when he is telling the truth and when not.

6. Your spouse makes you feel doubtful about your thoughts

When your spouse is able to distort the conversation and truth in such a way that you begin to question yourself and your thoughts, it means something is amiss. If the blame comes on you at the end of every confrontational conversation, then it is high time you investigate the matter further to understand what is actually going on.

If your spouse resorts to gaslighting, leaving you riddled with self-doubt, it could well be because they have a lot to hide from you. Making you doubt your own thoughts is their best bet at getting away with it.

7. Your spouse tries to distract you

Your lying spouse might try to avoid/shift topics. They might try to distract you by bringing up other topics and change the course of the conversation. And if your spouse is unable to do so, he/she will bring the focus of attention on you to avoid the limelight.

What to do when your husband lies to you and then tries to avoid a conversation about it? Well, dig your heels in and hold your ground. Tell him in no uncertain terms, that you won’t move on until he clears the air on whatever it is that’s bothering you.

8. They get too defensive

If you notice your spouse giving unnecessarily long explanations for even the simplest of things, chances are you are being lied to. They dive deep into the details of matters and over-explain themselves. This is a sign of a lying spouse and their guilty conscience. Overcompensating for a lie(s) makes them very defensive about all their actions.

Do these long-winding, often unnecessary, make you doubt your partner even more? Are you wondering if your wife has been lying to you a lot? Is the thought ‘my husband lies to me about little things’ weighing on your mind? Don’t ignore these gut feelings because they may be pointing in the right direction.

9. You get a gut feeling that things are not as they seem

Speaking of gut feelings, if there is a tiny voice in your head saying that your marriage is riddled with signs of a lying spouse, don’t overlook it. As the closest person to your spouse, you will immediately feel that you are being lied to and that something is wrong.

It’s possible your spouse is not hiding anything very significant. However, if you still get a gut feeling telling you something is wrong, trust your instinct.

10. Your spouse’s stories do not make sense

When your spouse is lying to you, there may be inconsistencies in their stories. Or they may omit or change certain details if asked about the same incident again. To catch your lying spouse, casually ask them to recount their account of a certain event after some time has passed. If things don’t add up, it’s undeniable one of the signs of dishonesty in a relationship.

Liars generally end up making mistakes and change minor details in their stories. If you’ve noticed such inconsistencies about where they were, who with and what they were doing, it’s about time you start paying more attention and be objective while listening to his/her stories.

In a relationship, two people are expected to be open to each other and share every detail with each other. If you suddenly notice your partner being distant from you, trying to hide more than they’re willing to share, then this could be an ominous sign.

Perhaps, they have been lying for far too long and it has just become too exhausting to keep up with. Hence, not sharing much has started to seem like a better alternative to your spouse. If all your questions about their day are met with monosyllabic responses, you need to dig deeper.

Being distant and aloof could also be a sign that your spouse is lying about cheating.

Your lying spouse will definitely get angry at small things. They might get unreasonably upset with you and snap at you. Anger helps your spouse escape your scrutiny and questions. However, this can be a perilous tendency that points to deeper problems in the relationship.

If you’ve ever wondered when to leave a lying spouse, this definitely qualifies as one of the situations where you may be forced to reassess the future of your relationship.

How To Confront A Lying Spouse?

However, there are ways in which you can confront a spouse who is lying:

Related Reading: How To Maintain Your Sanity If Your Partner Is A Compulsive Liar

How Does Lying In A Marriage Affect The Relationship?

Lying is considered toxic and poisonous for any relationship whatsoever. Trust, the foundation of any relationship, is destroyed because of lying. A singular lie usually leads to another and then another and another till it creates a snowball effect.

Lying signifies a lack of trust in the relationship. Once you have caught a lie, you tend to be suspicious of your partner in the future. In the case of a small lie, this feeling goes away with time. But, if you catch a bigger lie or a series of smaller ones, it leads to some major trust issues.

Your spouse’s lies will reflect their selfish attitude. This is detrimental to any relationship. The worst way in which lying in a marriage can affect it is if the relationship ends because of the lies.

When you’re in a committed relationship, you have to be honest with each other. Being in a serious relationship means you have an obligation of honesty towards your partner. If you think your partner cannot fulfill this obligation, maybe it’s time to ask if they are even ready for a relationship. If you think not, it is best to save yourself from the lies and heartbreak and end things for good.

Does your partner love you only when it’s convenient?

Should The Bride And Groom Split The Wedding Cost? How To Do It…

I think it’s you