Chalo maaf kar diya: How to achieve forgiveness in a relationship

Where do we go from here?

Anyone who has been in a romantic relationship will tell you that at some point they asked the question, where do we go from here? A fight between a couple always brings out uncomfortable emotions. However, it can also be an incredibly important learning experience. In the trajectory of a relationship, it is important to see how you actually get through a fight as a team and not as two parties who are at war. Any fight or argument or mistake that either of you may commit requires forgiveness as the main ingredient in order to be resolved.

Here are a few activities that couples can perform in order to achieve forgiveness.

1. Don’t get some distance

The first instinct of anyone who has a fight with the romantic partner is to go away. If you are in the middle of a fight where tempers are flaring, this might just be a good idea. However, after you have calmed down, leaving each other alone actually makes things worse. We are at our most vulnerable when we are angry and emotional. If partners don’t leave each other’s side and actually lean in, it causes magic. You know that no matter what happens, no one’s jumping off board. This reassurance, even when you’re not seeing eye to eye, is the first step in trying to forgive each other. So once you’ve calmed down, sit next to your partner. If they are crying, hold them. Forgiveness is not just words, it’s also an activity.

Forgiveness is not just words, it’s also an activity.

Whether it is playing video games or watching films together, any activity that you enjoy as a couple is an activity that you can perform after a fight. Such activities have proven to be beneficial for couples who are trying to forgive each other. They remind couples of a happier time. Finding that common ground in your favourite activity as a couple can help you find your way back to each other. So if you and your partner like cooking, long drives, playing a sport, do that together. Blowing off some steam together after a nasty fight works wonders.

3. Put your sorry on paper

Writing letters in the age of texting might seem ridiculous. However, writing down your emotions is actually a better form of communicating them. In a letter, you can actually think about the words that you want to say before you say them. You can also take it back and edit. We often misspeak; writing allows us a second chance. So writing an apology letter is one of the best ways of apologising to each other. The romance of writing letters might just make your apology feel more sincere to each other. 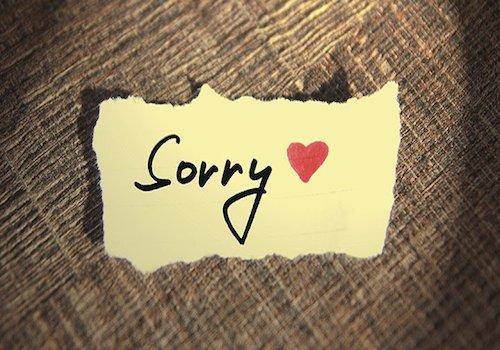 Related reading: A letter to my lover who cheated on me

4. Ask each other what you need in order to forgive each other

The meaning of forgiveness can be subjective. So unless you understand what you both want from each other, you run the risk of arguing in circles and becoming increasingly frustrated. So sit down, leave your tempers and egos at the door, and ask each other what exactly you both need to reach forgiveness. Ask about what forgiveness means. You may find out that one of you thinks forgiving is just sweeping things under the carpet, while the other thinks it’s discussing it till it’s solved. Such different understandings of the word may be the cause for you being stuck in anger. Talking about each other’s understanding of forgiveness may be the key.

We tend to think only about the problem over and over in our minds when we are in the midst of it. This exercise requires you to sit in front of each other and tell each other five things you love about each other. It could be your bodies, something you do, your personality traits, an incident. Try your best to not connect those things to the fight.

Do not talk about the fight or the argument. Just tell your partner five things you love about them. This may sound corny and will feel like the last thing you want to say at that particular moment. But it helps in changing your attitude when you’re feeling resentful. If nothing else, for a minute it will provide with a respite from being angry and hurt or apologetic. This exercise requires you to dig deep and remember the good times when all you want to do is lash out at each other.

Related reading: Spirituality helped me heal my relationship with a cheating partner

Be kind to yourselves

‘To err is to human, to forgive divine’, Alexander Pope said in his famous poem ‘An Essay on Criticism’. Now, that’s all well and good, but Mr Pope was a poet and the poem in question was talking about the literature of his time. However, this particular line is thrown about when talking about forgiveness everywhere. Forgiveness is great and healing, but it should not become a thing that causes pressure in the middle of an already stressful situation. So take it easy on yourselves. Forgiveness is worth striving for, but forgiving out of peer pressure is lying to yourself. So before you perform any of these activities, make sure you’re doing it because you want to get past the problem and not because forgiveness is the cool spiritual thing to do these days.

I used to be rude and irritated with my husband and now he has found someone else. What do I do?