What Are The Emotions Of A Man Who Is Going Through A Divorce?

One, is a lot of anger, a lot of disappointment, you know like a failure. A lack of confidence and low productivity is also there. No matter what’s the reason for divorce basically there is always a feeling that everything has gone down the drain in his life. A man going through a divorce feels the exact same things that a woman does, and goes through the same emotions more or less.

A woman also feels the exact same things, but since we are talking of a man here, we are going to focus on one gender. Most of the male clients who have come to me after a divorce feel confused, withdrawn and very angry, feeling ashamed, feeling a lot of pain, feeling like a failure. Men also feel very lonely after divorce. Coping with a divorce as a childless man or a father is challenging, to say the least. Whether you have kids or not, it is not easy, so what is the aftermath of a divorce?

How to cope with divorce as a man? This a question I am often asked. I would say for a man who is childless, it is a bit easier. He is just thinking about himself, so it is just easier to live with it and move on a bit faster.

The grieving process is of course there, it is not that easy. I tell most of my clients not to get involved in relationships just for the sake of it, or have a rebound relationship. For people with children, it depends. There are fathers who are just not that involved in their kids’ life. To kind of get even with the wife, they try to use their child.

I know a particular couple who are stuck in this scenario. I’ve only met the wife though. The husband wants full custody of their child and will only allow her to meet the child under complete supervision.

He is scared that the wife will turn the child against him. So a lot of these controlling behaviour and seclusion is exhibited by the man.

In my opinion the best way to handle a divorce as a man is not to get into the pettyness. I know it’s easier said than done. When a huge alimony is demanded and there is a custody battle looming, it’s not easy to be in a peaceful frame of mind. But a man needs to think of what kind of impact the divorce battle is going to have on his future and take his decisions accordingly.

Why is it so hard to cope with divorce as a man?

There are a lot of fathers who are very much involved in their children’s life. So they go through a lot of trauma and the kids are usually with their mother if they are young.

And then they are getting to have weekend visits so they have to stay in touch with their ex-spouses and try not to express their true feelings or anger towards them. So, the person who has no kids, he does not have to interact with his spouse anymore.

But the person who has kids has to still remain in contact with their spouse. This is when it becomes harder to cope with a divorce. This invariably leads to conflicts and arguments, sometimes in front of their children, leading to an awkward and uneasy feeling. Men often withdraw into a shell after a divorce

So, there is no flexibility between them and basically the child is used to get an upper hand over the other.

This is the worst aftermath of a divorce. A child is tossed between parents.

How long does it take for the man to get over a divorce?

It depends. It depends on the person usually, but on an average the person who has been taken by surprise because the divorce has happened, finds it difficult to move on. When a wife asks for a divorce a man often goes into a state of shock because he never saw it coming.  He never saw the warning signs of divorce.

Men keep on drowning in the pain and despair for a long time. They may take a year or more to move on. But the person, who has initiated the divorce, finds it easier to move on. So if it’s the man who wanted the divorce then chances are he would move on faster.

Is it same in case of a breakup?

Yes, same as that getting through a breakup. A person who is going through a lot of pain, trauma, anger, takes a good year or more. Healing after a heartbreak is as difficult after a marriage as it could be after a breakup.

People go through all kinds of emotional upheavals when their relationships do not work. But it is possible to get over a break up as it is possible to move on after a divorce. But one needs that time to process the emotions and go through the entire phase before they could come out of it. There is no quick fix process but some steps can be taken to make the healing faster.

Is male depression after divorce real?

Yes, it is very much a real thing. Male and female depression after divorce is real. After all, it is a complete change in their lifestyle. (Because a large majority of Indian men still shy away or try to avoid topics like mental health altogether, usually it is the wife/female partner who comes in for therapy.) Men do take time to recover from a divorce

One of my female clients told me that the fact that she got divorced kicked in only after a few months after the divorce had happened. That’s when the loneliness kicks in, you know. You start feeling extremely lonely, you miss the routine of the daily life and you feel your world has collapsed. So surviving divorce does not come easy.

How to cope with divorce as a man? Men have to start accepting that their life has changed and if need be they must opt for counselling to help them ease themselves into this new life.

Does A Man Change Himself/Change His Ways After A Divorce?

Oh yes. Let me tell you, one case where the man has actually changed himself, he has put it on Facebook, he is actively dating.

There is another case where the man has completely secluded himself and is interacting less even with his family. So, a lot of how you actually react to the divorce actually depends on the personality.

Related reading: Do You Know Divorce Changes Men? And If He is Remarrying then Consider This…

What is the best way to handle a divorce as a man? 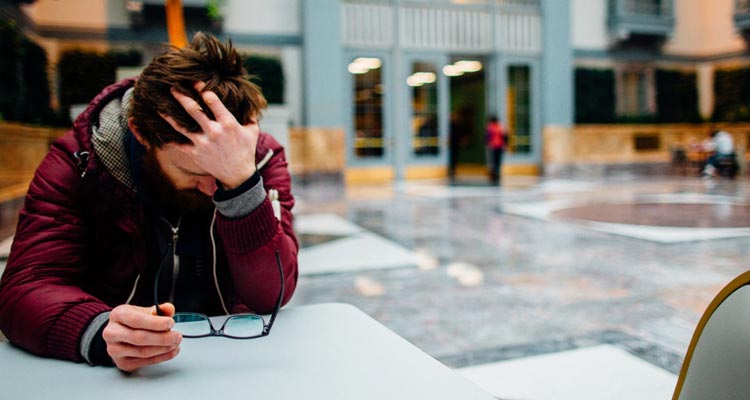 What is the best way to handle a divorce as a man?

Divorce can be rather harsh for a man, the emotional trauma post divorce is sometimes the same or even worse compared to the woman, even though it is usually the woman who is depicted as the sole one struggling with their divorce proceedings as well as dealing with their children, if any.

Brad Pitt described his anguish post his split with Angelina as he slept on a friend’s floor for six weeks as he was “too sad” to go back home.

No doubt, men are often denied custody of their children, financially ripped apart with child support charges and have a hard time dealing with the grief of losing their family.

Most of the time, men have someone else waiting for them post divorce, even when they are dealing with their divorce and actively not looking for anyone. For most men going through a divorce, there is hope always, to find new love again. They might take their time to settle down first and start things afresh with the inculcation of new hobbies, eating healthy, working out regularly and so on.

Related reading: 7 Things You Didn’t Know About Men and Divorce

If the question is how to cope with divorce as a man then it is always recommended the time they take off for themselves helps them to get better. With time, the painful memories fade away and they can move on for good. One has to process the emotions after a divorce. It is normal to feel the pain but with time one does heal.

Can 38 year-old divorcee find a second chance to marry