1. You try too hard to please your partner

You are constantly being careful about not to do or say anything that might trigger a negative response in your partner. Being in an abusive relationship simply means walking on eggshells – where you don’t know which action, direct or indirect, from your end can cause an emotional backlash or even physical abuse. Even a seemingly trivial matter can cause a fight and you are always put on the wrong side.

Related post: How does the abuser operate in an abusive relationship?

2. Your partner can express opinions, but you can’t

Abusive relationships are imbalanced in nature. If your partnership doesn’t allow you to be expressive of your thoughts and opinions, if your partner feels it’s okay for them to rant on occasions yet your negative emotions make you a subject of their criticism, if your partner dismisses your opinions in front of friends and makes you a butt of their joke – then it’s a definite sign that you must break up NOW. 3. You are a victim of Gaslighting

You might not be familiar with this term, but Gaslighting is a common form of manipulation that most of us have seen at some point in life.

It’s a form of psychological abuse which aims at manipulating someone to such an extent that makes them doubt their own perception of the events and finally their sanity.

It’s an undercover emotional abuse in a relationship that slowly eats your sense of judgment and you start self-loathing. Your partner could be gaslighting you and trying to prove to you that you never felt or said something when you actually did. This is a dangerous sign of abuse and is often used by many people to keep control over their partners.

4. Your partner doesn’t trust your emotions

Complete trust for each other makes the foundation of a good relationship. But in abusive relationships often the abusive partner behaves in these particular ways because of low self-esteem. This makes them mistrust your emotions. In a case like this most emotions expressed on your part becomes an attack to them. Because of their lack of trust on the partnership, they assume any expression of displeasure from your end is designed to hurt them personally. The abuser, in this case, sets off emotional backlash or in a worse scenario and tries to physically hurt you.

5. You feel isolated and trapped

An abusive relationship thrives on isolating the victim from the world. Your partner might try to dress up this urge to ‘have you all to them’ as romance, but this way the abuser in this scenario actually isolates you from friends and family – people who could help you or offer support. Being in an abusive relationship makes you feel trapped as the abuser turn to intimidation or emotional blackmail to not let you go out of sight. 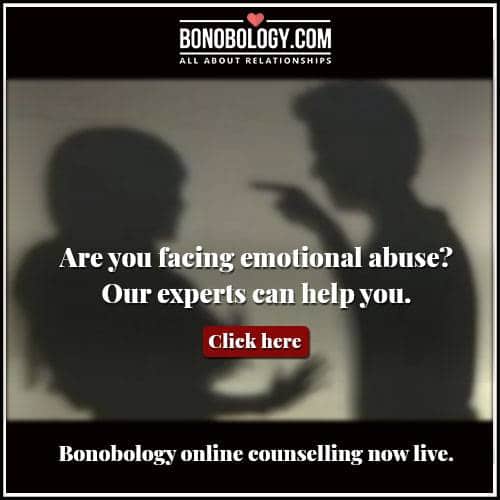 Jealousy in a relationship is normal but unhealthy jealousy could kill you. If you have stopped interacting with friends from the opposite sex, if you keep looking over your shoulders at the party when someone talks to you warmly or if your partner sees red when someone comes and gives you a Hello Hug then you are the victim of unhealthy jealousy. This will result in relentless fights and surveillance on you. Question is are you ready to accept that?

7. The mood swings are unpredictable

Every person has mood swings that’s only normal. But when you are in an abusive relationship the mood swings are bound to catch you off guard. If you buy a new dress after a trip to the mall you come home with a sense of trepidition. Your partner could go over the moon seeing the dress, tell you to wear it immediately or show them or they could scream, shout or even slap you for splurging on a dress they could believe you did not need. You don’t know which side their mood would swing and you are always at tenterhooks about that.

8. They will criticize, but they can’t take criticism Criticizing in a relationship Image Source

Criticizing you is their second nature. What you wear, how you walk, how you talk, what kind of friends you have, your family, your work – nothing escapes their criticism. But you dare to tell them that they are wearing a crinkled shirt and they should probably change it before heading to work, then you have had it. They are never open to any kind of criticism and could become physically abusive at the slightest opportunity.

9. Gives you the silent treatment

Couples fighting and not talking to each other for a day or two is okay. In fact, silent treatment in this case could benefit the relationship because they would process their feelings and then only open dialogue. But if someone gives you prolonged silent treatment and ignores you for days on an end then it is nothing but a kind of emotional abuse.

The abuser builds a wall and wouldn’t let you penetrate it because they want to punish you. This kind of stonewalling is the worst kind of abuse a person could be subjected to.

Initially this might feel wonderful when your partner starts the day and ends it with an “I love you” uttering it at east 10 times in a day in between. But what happens when you are not in a position to say it back immediately? You could be at an office meeting when they call, or you could be even in the washroom when you take some time to reply to the “I love you” text.

Do they get angry and upset when you cannot reply as per their needs? This is one of the signs of an abusive relationship that you could mistake as crazy love.

11. In the name of care and concern

How many times does your partner say that you don’t understand their care and concern? They could be stopping you to go to your friends place at 7 pm saying that it’s their concern that you should not be returning late. They could even stop you from visiting the grocery story in the fear that you could meet a stalker there. Their care and concern could turn out to be  chain for your independence. Be careful about that.

12. There is a constant cycle of apology Abuses and then apologises Image Source

Your partner could hit you and then apologise and come home with gifts and even take you out to an expensive restaurant. Don’t get swayed by it. This is only the beginning of a cycle that you would have to grapple with in your abusive relationship. If someone hits you look at it as a red flag immediately and do not continue the relationship. No amount of apology justifies physical violence. But if they are ready to see a counsellor and address the problem then you can still consider.

13. Your partner abuses you financially

Financial abuse is something we don’t take into account in a relationship. But if your wife is over spending on your credit card or if your husband insists on keeping your pay and giving you some “pocket money” from it then this  definitely financial abuse. If the girlfriend never pays and the boyfriend is spending through his nose to take her out always then that’s a sign of abuse too. Some things are not treated that seriously in our society but financial abuse can amount to serious mental and emotional stress in the long run.

Related Reading: How To Deal With Domestic Abuse During Lockdown

14. You are perpetually on a guilt trip

Your partner sends you a guilt trip often. If he didn’t get a promotion at work you could be blamed for asking him to leave office on time to be home to spend time together. If they have a stomach bug then it could be that you didn’t cook right. If they partied late with their friends and came home drunk they had to do it because you have been a nag. The blame game is endless and you are expected to feel guilty about everything. This is one the major signs of an abusive relationship that you should be able to understand quickly.

Withdrawing affection and physical intimacy comes very easily to them. They could be using it as a means to punish you. This is an absolute sign of an abusive relationship. A hug is the easiest thing to give to a partner. But if they are purposely keeping a physical distance then you need to pay heed to it. Your partner is not just being childish, there is more to it. Manipulative behaviour is a sign of abuse. You decide on something but they would manipulate you in such a way that you would change your decision without even feeling that they have a role to play in it. This is a dangerous sign. Manipulation can be so subtle that you could be giving up everything that you hold dear in your life not for once realising that you have been actually forced to.

17. Excludes you from their life

When it comes to your life you cannot do anything without their permission. If you are meeting friends, that is if they allow that, they could even insist to come with you all the time. But when it is their life you are excluded most of time. You don’t know most of their friends, they wouldn’t take you to family parties and you are mostly kept out of their travel plans.  They shop on their own, hang out with their colleagues and have a life of which you are not a part in any way.

Related Reading: How To Get Out Of A Controlling Relationship – 8 Ways To Break Free The easiest way they would keep a tab on you is hand over their passwords and smartphone to you and tell you to do the same. You would look at it as a great sign of love but since you are not the nosy kinds yo wouldn’t be going through their emails and phones but they would, always. People who abuse have no concept of privacy so they would keep stalking you on the phone, on email and on social media.

20. Very charming to others

One of the major signs of an abusive relationship is your partner could give you hell but they could be the epitome of charm to other people. In the book When I Hit You written by Meena Kadasamy the abuser in the relationship was such a charming and nice personality that the wife’s own parents would not be convinced the kind of hell he was capable of giving their daughter. So when you see too much charm beware.

If you think this sounds a lot like your relationship then don’t wait – talk to someone who can help. If the relationship is affecting your mental health, work or study, everyday life and close relationships then it’s not worth to hold on to. Talk to someone you trust and find a way to get out of the mess. There’s always one.