Top 15 Signs Of An Overprotective Boyfriend 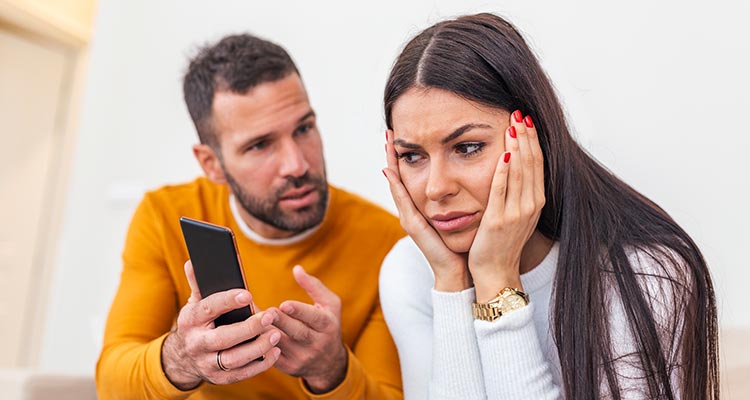 Your boyfriend loves you. There’s no doubt in your mind about it. But does he show his ‘love’ by restricting your freedom? It’s quite natural for people to feel protective of their lovers. We want to keep them from harm and hurt as much as possible. However, it’s a whole different ball game when your boo throws a fit about the dresses you wear or the pictures you put up on social media.

Independent women accustomed to making their own life choices often find out, their overprotective boyfriends are way less progressive than they had initially thought. The key to avoiding such toxicity later in the relationship is to notice the red flags early on. And, if your new Tinder date is showing the signs of an overprotective boyfriend, run. Overprotective partners are really, really not worth the trouble.

15 Signs You Have An Overprotective Boyfriend

Why are guys overprotective? And does it really stem from love or something else entirely? Maybe you’ve been feeling uncomfortable around your boyfriend but can’t quite pinpoint the source of unease. Or maybe you just had another screamfest over your last social media post that was liked by a random male coworker. While every person behaves differently and the overprotective boyfriend meaning is constantly shifting, there are some telltale signs that you have an overly possessive boyfriend.

If your man keeps snooping around your affairs, it’s usually a dead giveaway of his jealous nature. He might be eavesdropping on your conversations or always trying to keep track of where you are going or just cross-questioning you incessantly. He might ask you to share your GPS location with him even after you tell him exactly where you are going. People, take a step back before it gets any worse and try to communicate with him clearly that his utter lack of trust in you is making you uncomfortable.

Related Reading: I Had Blind Faith In My Partner But Now I Can’t Trust Him

2. You have an overprotective boyfriend if he disregards your personal space

This red flag is a glaring one and there’s little to no chance of misinterpreting it. If you ever catch him going through your phone when he thinks you are not looking or rifling through your diary without your permission, it can only mean one thing: he’s a possessive boyfriend. He clearly doesn’t understand your personal space or the importance of your privacy. Building a relationship with a man who has no respect for your boundaries is a struggle and never worth the effort.

There’s a jealous bone in everyone. We’ve all felt it flutter in our bellies when our favorite person seems to be paying attention to someone else. But then rational thought and sheer trust in our partners take over and we realize we’re overreacting. So, if your jealous boyfriend accuses you of flirting with every man you speak to, you’ve got a problem. This is a clear sign that he is constantly feeling insecure about the men you interact with.

Insecurities like that often tend to snowball into abusive relationships. So, unless it’s at a level where clear communication can solve everything, you should avoid people like that at all costs.

If your boo seems to have a problem with you doing anything without him, it’s generally because he wants your life to revolve around his. You might think it’s one of the signs of a protective boyfriend, of someone who cares enough to always want you around. In truth, he’s probably more concerned about staying relevant in your life and can’t deal with dating an independent woman. If this keeps happening, you have to set some clear boundaries instead of giving up all your hobbies and friendships just to appease him.

Related Reading: Husband Abused Her When She Said She Wanted To Get Back To Work After A Break

Ever had a boyfriend who treats you like his personal property? If you have had the misfortune of having such a person as your partner, then you know that such relationships rarely last. He might keep insisting that you’re his and his alone. It may feel romantic initially, watch out for when things get out of hand and he starts getting possessive in the relationship. There is a difference between being cheesy and being toxic. If he doesn’t seem to know the difference and often shows his ‘love’ for you by trying to keep you from male friends and colleagues, it may be time to for a serious conversation.

If your boyfriend expects you to always be at his beck and call, you might want to rethink your relationship. Overprotective boyfriend stories tell us that men like these will feel entitled to every moment and aspect of your life. And if you try to safeguard your personal space, accusations will rain down on you like a hailstorm. Men used to their sense of entitlement can get very abusive if you try to correct their behavior.

The signs of them being overprotective in a relationship may not always be apparent to you right away, especially if you’re still holding on to your rose-tinted glasses for dear life. While some might vent their anger by yelling at you, others may try to guilt-trip you.

Related Reading: Power Struggle In Relationships – The Right Way To Deal With It

If you go out with your friends and have a good time, your overprotective boyfriend may turn passive-aggressive. He may guilt-trip you for not spending that time with him. In the end, you may end up with an overwhelming amount of guilt for just wanting to spend your day the way you want to. Proceed with caution if this sounds familiar to you. While harder to spot, this is one of the classic signs of an overprotective partner.

Some men are naturally dominant. They are great at making split-second decisions and generally being the ones in control in relationships. But the trouble starts when they take it too far and start making your choices for you.  This trait may manifest in seemingly inconsequential ways like always deciding the dinner menu for you. It might seem cute at first but things will get a lot less fun when he starts dictating your career choices and who you hang out with. Once you get used to it, it’ll be very hard to reclaim your independence.

9. An overprotective boyfriend would be restrictive

If your jealous and controlling partner starts restricting your freedom of movement, it’s a clear sign that he is being overprotective. That cafe you love going to will suddenly be off-limits because you smiled at the waiter. Or your girl’s night out will get canceled after he throws a tantrum over you going out without him.

Try to nip such tendencies in the bud because, if you let him, an overprotective boyfriend will keep at it till he has you cornered with no space to breathe. Nothing kills a loving relationship faster than the feeling of dating a control freak.

10. Tries to stop you from wearing what you like

Some men like to obsess over the clothes you wear. They can’t understand that what dress you wear, how much makeup you put on is entirely up to you. They will berate and harass you for wearing anything that doesn’t cover every tiny skin cell. These tendencies come from a feeling of insecurity and a misplaced sense of possession and can be very harmful in the long term.

If your overprotective boyfriend starts exhibiting such signs, explain to him that you have sole agency over your body and your attire. And, while you can appreciate his inputs now and then, he shouldn’t try to dictate how you dress.

11. Issues with your social media

People in relationships do tend to keep an eye out for their partner’s social media posts. And why wouldn’t they? Social media is almost a surefire way of telling your person’s mood. It also lets you appreciate their memes and pictures. But some tend to take it a bit further. They dislike every selfie you post, look at every status with a suspicious eye. They might even tell you to stop posting entirely and that your social media presence is ruining the relationship. Sounds absurd, right?

Overprotective boyfriends stalk your social media and bring up every little thing you do as an issue to fight over. And woe is you if you ever dare laugh at another guy’s jokes. Sound familiar? Then it may be time to go back to being happily single.

One common trait in all overprotective boyfriends is how volatile they become if you go against their wishes. They become aggressive at the drop of the hat. And their abusive behavior can quickly escalate to violence. These tendencies usually start slow and gain momentum over time as more and more of their aggression go unchecked. And this qualifies as one of the biggest relationship red flag.

If your overprotective boyfriend texts you or keeps calling you throughout the day when you make plans with other people, then he clearly doesn’t want you paying attention to anyone but him. It might get to a point where he obsessively tries to hog all your time. If you take a day away from him, your phone is going to get bombarded with angsty texts and angry phone calls.  Definitely another classic sign of toxic levels of overprotectiveness in your partner.

14. Your praise is poison

An easy way to spot an overprotective boyfriend is to see how he reacts to you praising other men. An overly jealous boyfriend won’t be able to stand you praising anyone else and would instantly create an issue over it. They might even go as far as to call you disloyal. Such men always want to be at the receiving end of your smiles and praise and cannot accept you paying attention to anyone else even for a moment. It might get to a point where even a friendly smile to a stranger can trigger his insecurities and send him into a fury.

This is by far the most toxic trait of an overprotective boyfriend. Manipulative men will whittle away at your self-confidence over days and weeks and years, till you become a shadow of your former self. It is much easier for them to control you if they can constantly undermine your choices and make you doubt yourself. They will deliberately mess with your mental health, emotionally abuse you, and use gaslighting phrases on you at every turn to make you more pliable.

Such egomaniacs will keep on going till you lose all semblance of independence. Such behavior is not even a red flag. It’s a stop sign the size of a billboard.

We all want to protect the people we love. If it was up to us, we would probably wrap our beloveds in bubble wraps and put them on a shelf, away from harm, hurt, and heartbreak. But that is no way to live. If your partner’s love tends to translate into an overprotectiveness that keeps you from living your life, a serious conversation is in order. Do tread lightly, though.

There is a thin line between wanting to look out for someone and the overwhelming need to possess them. Learn to recognize the difference between the two, and, broach the subject with your partner only if you’re assured of your safety. If not, run. Any relationship that puts your safety and mental wellbeing into question is not worth it.

How To Deal With A Controlling Husband?

What Happens When Neither Of You Asks For Consent?