OK, this is a shout-out to all the mothers out there who want to be best friends with their daughters, particularly pointing it out to the mother of my colleague who is getting married in a month and who had to follow me discreetly to the loo, while shooting nervous stares at me. So, when I offered a sanitary pad to her, she just nervously giggled and said, “I wanted to talk to you.”

No adult talk with mommy

And, talk she did. A lot. And after three coffees, I was the one who was holding my head thinking of this little 21-something, 46-kg weighing girl, and the empty canvas she was. Because empty she was. Of emotions, knowledge and worse any regard for her sexuality. Because, she is best friends with her mummy but, of course, can’t talk about the adult stuff with her (rolling eyes).

No idea about sexual intimacy

So, we sat in that cafeteria with her looking everywhere for any people who might overhear us, and a million questions on her face, none of which she could or would ask. But, she did after much cajoling. Questions like, ‘Does it hurt?’, ‘When do you do it?’ or ‘How do you do it?’ don’t throw you that much, but questions like, ‘I read online, that love bites can kill you, is that true?’ make you snort the coffee and sprout the aforementioned beverage from your nostrils.

And, while I laughed at first at the poor knowledge this girl had, I was soon disturbed by the fact that how unaware she was about her body and sexuality and yet, was willing to spend her life with a guy she had known hardly six months. Worst was the part where she confessed when her fiance had tried to kiss her and she had rejected him, simply because it was ‘disgusting’. Ew! I asked her what she would be doing about sex if she found even kissing repulsive. She said, ‘Ho jata hai.’ 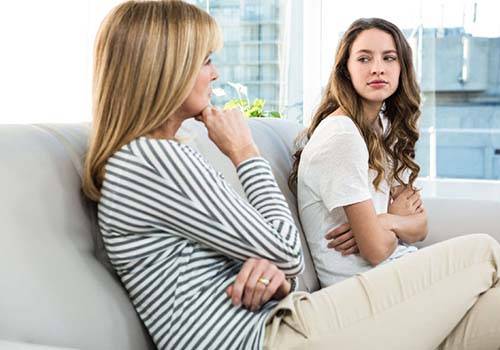 I asked if she had any boyfriends and she went on saying that it’s such a bad thing to even touch a man. Well, that’s completely her choice, but she can touch herself, right? To this, she blinked her eyes. Touch? How? Where? There? Ew! Susu comes from there… After I had picked my jaw that had fallen to the floor, I asked ‘Have you never felt wet down there? Haven’t you ever watched Titanic?’ ‘Yes but what about it?’ I tried explaining how the clitoris works, but she said that she was eating and would rather not listen, so I gave up telling her about orgasms.

She was just not ready

I told her you are not ready, for anything, for marriage, for sex, forgetting the burden of all that responsibility. But, she went on sighing how we women have it so difficult that we have to go through periods and sex and child-bearing. And, how when she exclaimed the same in front of her mother and grandmother, they said that didn’t they do it in their times. ‘What’s the big deal?’

She has no idea about her body

The clitoris, the breasts, least of all, the vulva. She doesn’t know what things work for her and God knows if her guy would. If he doesn’t, then this girl is in for a long time of staring at the fan and wondering when the ordeal would be over.

She has no idea about her sexuality

Shit, she doesn’t know how amazing the clitoris is, how does she even know if heterosexual sex would work for her. You are simply tying her to a guy with hopes of his satisfaction but none for her satisfaction. Because her satisfaction is just an add-on, not a requirement.

What if they are not even compatible?

Or the sex is painful, or something doesn’t work. Sex is just not for having kids. If you are in with a man for the next 30-40 years, sex should be the biggest criteria I think.

There’s a shitload of information online

Auntyjis, talk to your daughter

Talk and tell her, that kissing is not bad, that sex is not bad, that thinking about your climax is not bad. That it’s not repulsive, or abhorrent, or something that you don’t want her to even think about but expect her to be all ready when her husband comes with a glass of milk. Because you are not truly best friends with your daughters if your daughter has to go to a random colleague to ask about ‘If you can die from the bleeding in sex?’

Of love, cartridges and razor blades

Is tonight the night?

A crazy bookworm, passionate dreamer and lover of nature. What Ruchika Thukral can’t say, she writes. And what she can’t write, she screams at the top of her lungs!!